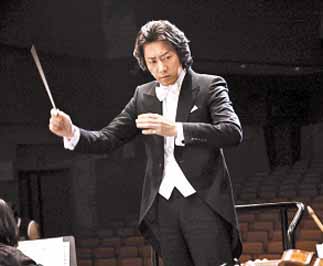 Sadomasochistic joy of the Maestro’s insults
I had no idea that I would be thrilled to hear “You’re a lump of shit.”

My heartfelt apology to you if the use of the S word ruined your lunch, but let me tell you that there is something deadly attractive about the line “lump-of-shit” when articulated by lead actor Kim Myung-min.

And I am not the only one who feels this way. The drama “Beethoven Virus” on MBC-TV, is enjoying smooth sailing with an audience rating well over 15 percent on Wednesdays and Thursdays at 10 p.m.

The show is about a rabble of amateur classical musicians building their musical dreams under the baton of their stern conductor. Starring Kim, Beethoven is a very good reason to be home before 10 p.m.

This story is a rather tried-and-trusted story about every Tom, Dick and Harry collaborating to realize their dreams, but this program sparkles with the jewel that is Kim and his virulent tongue.

I am now hunting online for a collection of scenes in which Kim speaks the line. Type in the name of the actor on an Internet portal site, and you are given “lump of shit” as a related keyword.

A lump-of-shit medley in Kim’s voice from the drama has even evolved into a ringtone.

Yes, there is a sadomasochistic kind of fun here, but his resonant voice and lucid pronunciation gives fragrant spice to the line.

It is just one of many signature vituperations of the lead character, Maestro Kang Gun-woo (Kim), an amazingly talented yet cold-blooded conductor.

The lump-of-shit line comes from a scene in which Maestro Kang (nicknamed by Koreans as Kang Ma-ae) curtly berates a middle-aged woman who wants to pursure her long-lost dream of becoming a professional cellist.

“You don’t practice but you want to look good as a performer in an orchestra and plus, you have this vain pride as a music school graduate,” Kim said, poker-faced, hardly moving any of his facial muscles. “You deserve to be called a hopeless nuisance, a stumbling block and, most precisely, a lump of shit.”

His other relentless comments include, “Juilliard? Play like a dog, and you’re in there. What’s so great about Juilliard?” and “Your performance was rubbish, and you disgraced Brahms.”

Listening to his rants is a pleasure and his acrimonious ways are strangely cathartic.

What’s intriguing here is that viewers are more than willing to embrace these ruthless words, which is rather unexpected in a country like Korea, where beating around the bush is often considered better manners than being direct.

But I’ve noticed a trend these days on television here for characters in dramas to be more aggressive in the way they speak. Perversely, it’s seen as charming by some viewers, giving them a sense of liberation.

What makes Maestro Kang’s ruthless speech more special is that he knows what he is doing. He is so talented he doesn’t have to care about manners. His wagging tongue hurts the listeners at first but it eventually works to move the hearts of his orchestra, egging them on to realize their dreams. Maybe this is why many viewers say they’d like people like Maestro Kang in their offices.

The danger is that we might see unqualified and untalented Maestro Kang mimics badgering us at work. Thankfully, we have that lump-of-shit video online to watch, to see how the master does it.