Fighting mad and mad for a fight

Fighting mad and mad for a fight 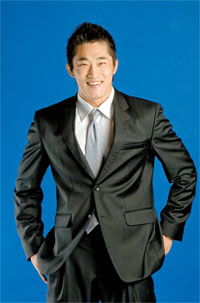 And he has done it the hard way.

What started out as a violent sport with a cult following has now become mainstream. With 88 tournaments to its credit, the U.S.-based fight organization UFC has become the top platform for mixed martial arts fans in terms of the quality of the bouts and size of the events.

The sport is widely known for its octagonal fighting zone, instead of the usual “ring” you find in other mixed martial arts tournaments. 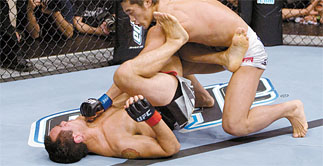 Kim pounds Jason Tan during his UFC debut match in May 2008. [JES]

The top heavyweight fighters can rake in close to $1 million with the combination bout.

Kim Dong-hyun, a newcomer in the UFC welterweight division with the menacing moniker “Stun Gun” has the looks and charisma to match a flawless professional record. He is considered one of UFC’s promising young fighters.

The manner in which Kim has achieved his dream of fighting on the international stage is as impressive as it is different.

Other notable Asian fighters have crossed over into the sport from other disciplines. Examples are former ssireum (traditional Korean wrestling) national champion Choi Hong-man, who fights in the Japanese K-1 league, and Yoshihiro Akiyama (Chu Sung-hoon), an Olympic judo gold medalist.

Kim joined the biggest of the mixed martial arts organizations as a rookie and worked hard to compete. He didn’t have the pedigree of success prior to getting involved and had to work his way up the ladder.

Kim first encountered mixed martial arts on cable television in 1998 when he was still in high school. He was hooked immediately and thought this sport would be his destiny.

“It was shocking to see two men brawling being recognized as a form of sport. I always dreamed of becoming a strongman,” said Kim. He recorded the Shuto tournament, another Japanese mixed martial art, off cable television and watched it over and over again.

“I got excited just watching the event.”

While Kim was training in judo, he began taking taekwondo and hapkido classes during his free time to help improve his hitting.

“Prior to becoming a fighter, I was a mixed martial arts maniac. I was able to realize my dream by training hard over the past decade,” said Kim.

Although Kim is enjoying the success of his budding fighting career, things were not always so easy. He started judo training in his third year at Samchun Middle School in Daejeon but could not get into a specialized physical education high school.

As a result, although he showed talent, he had to apply to the Yongin University judo program rather than be recruited. This meant it was difficult for him to become a national team member, but that wasn’t a problem for Kim since he had his sights set on becoming a mixed martial arts fighter. He went on to volunteer for the Marine Corps in 2001 with the goal of improving his grit and tenacity.

Upon completing his military duties in 2003, he joined a mixed martial arts gym in Seoul. Then he surprised more experienced fighters at the gym by announcing he wanted to enter the domestic KPW competition, another league in the sport, in September that year. Experienced fighters at the gym told him, “You’re gonna get beat up pretty bad if you don’t watch yourself.”

Despite the worries of those around him, the inexperienced Kim passed the entry test and went on to win the tournament by beating all three of his opponents.

So Kim had become a fighter in the small- to medium-sized tournaments in Korea, and while no one gave him credit, he was happy nonetheless.

To say Kim’s parents were unhappy to learn of their son’s chosen career would be the understatement of the century.

Upon winning the KPW tournament, he told his parents of his intention to become a full-time professional fighter. They responded by telling him they would rather disown him.

Such strong opposition from his parents forced Kim to rethink his options and in an effort to start afresh and earn some money, he landed in New Zealand and worked at a noraebang and a fish market.

“I worked just about every waking moment during my stay abroad. However, I didn’t make as much money as I had hoped. But I thought I would rather die than live my life as an ordinary Joe,” said Kim.

His overseas odyssey lasted just three months. “The move didn’t make much sense financially so I decided to pursue my passion in the end,” he added.

Upon returning to Korea, Kim continued training, but in secret. He eventually realized his dream of becoming a professional fighter by entering a domestic Spirit MC tournament in 2004.

Although he won his first two fights, his father eventually found out through a friend who saw one of Kim’s matches on television.

Kim went on to enter the Japanese Deep tournament in 2006 and while most thought his decision was rash, he went undefeated. He fought once every two to three months but the measly payout of 500,000 won ($398) to 1 million won per fight made it hard for him to make a living.

He began to train even harder, spending every minute in the gym. His desire was to break into the biggest, globally recognized Japanese fight organization: Pride FC.

Last August, Kim’s dream was within his grasp when he was signed to fight in a Pride FC tournament after defeating Hidehiko Hasegawa by a technical knockout. However, Pride went bust after being bought out by Zuffa, the American promoters of UFC.

Then the opportunity of a lifetime came by last August when, through the help of the Super Action cable channel, which holds the licensing rights to UFC fights in Korea, Kim was selected to fight in a UFC tournament.

“I’ve seen many fighters much better than me over the years. What set me apart from the more talented was my love of mixed martial arts and my sheer perseverance,” said Kim.

He won his debut match for UFC this May by defeating Jason Tan, a 25-year-old Brit, on another technical knockout.

In September, he went on to defeat an American fighter, Matt Brown. He received $40,000 and $45,000, respectively, for the two fights. He even received bonus income from UFC representative Dana White for his exciting fighting style. It was a huge payday for a fighter who once struggled to make ends meet.

Kim has all the physical attributes to succeed in the UFC. His 184-centimeter (6-foot-1) height and a 98-centimeter reach is considered outstanding for a welterweight-class fighter.

His next goal is defeating the current welterweight champion, Georges St. Pierre of Canada.

Believe it or not, winning is not everything for this fierce competitor. Kim grows visibly frustrated when speaking of his fight against Brown.

“I’m not satisfied with decision wins. I’d rather lose by a knockout. UFC fans prefer exciting fighters over winners. I share that feeling. I need to be more aggressive to earn the respect of American fans,” said Kim.

It seems Kim was born to fight. “I don’t get nervous for fights but rather get excited. It’s because I enjoy and love what I do,” said Kim with a smile.

“Most fighters get nervous for a fight and often fail to show their true capabilities. However, Kim actually enjoys fighting. He’s a better fighter at competitions than in training,” Jung said.

“To be honest, road work is tiring and boring. However, hitting and getting hit is always fun. I’m can’t wait to get in the cage again,” said Kim.