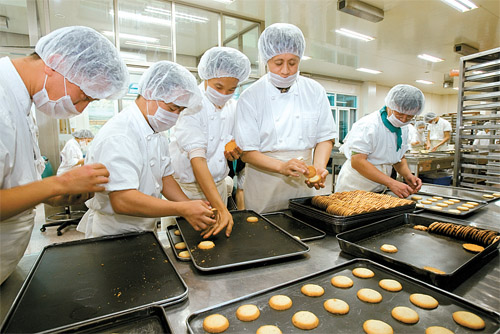 People with special needs bake cookies at We Can, one of more than 100 social companies in Korea. By Shin Dong-yeun

In a market economy, companies function for a single reason: to maximize profits. But not everyone defines existence in monetary terms.

A small band of companies do business for the purpose of employing people. For them, making money is important, even necessary, but providing a stable job for people without one is a priority. 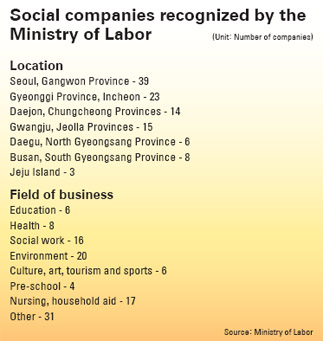 At the Ministry of Labor, these firms are categorized as “social companies.” The term was popularized by Bill Drayton, the founder and chairman of Ashoka: Innovators for the Public, a nonprofit organization dedicated to fostering social entrepreneurs.

Social companies have to make a profit but it’s how the revenue is used that makes the difference. They tend to emphasize social responsibility and the money made is reinvested for social purposes. 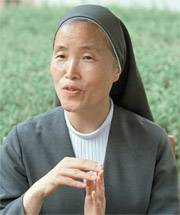 Such companies strive to provide social services such as creating jobs and providing education. The nonprofit characteristic is certainly there but by selling products and providing services, elements of a business company have to flourish.

Today, there are an estimated 55,000 social companies in that country. According to the British government these companies account for 5 percent of total employment and their annual sales amounted to 50 trillion won ($40 billion) in 2006.

When the actor Paul Newman died recently, a lot of the press coverage focused on Newman’s Own, his food company, the proceeds of which are donated in entirety to charities. Considering that companies are regarded as generous when they donate about 2 percent of their profits for charity, Newman’s company was a rare case.

Since its foundation, the company has donated $15 million.

Google.org, a subsidiary of Google, aims to address climate change, poverty and emerging diseases by investing in companies that nurture specific and related technologies.

In South Korea, in the aftermath of the Asian financial crisis in 1997, there was an acute need for jobs. Nevertheless, facing such a dire situation for the first time, at first only laboring jobs were provided for the jobless. In 2003, the government tried to create jobs by broadening education but the move was never pursued long enough to see tangible results.

Last year, a law aiming to groom social companies was established. Companies that are certified by the government now get tax breaks and financial aid. As of the end of September, 108 companies could call themselves social companies.

These companies receive financial aid from the government for their employees’ medical insurance and employment insurance. When hiring professionals in accounting or marketing they can also receive up to 120 million won per month from the government.

In addition, the government offers low-interest loans worth up to 400 million won and a further 100 million won loan is available for operating expenses, which can be repaid over a five-year period at 2 percent interest.

Interest in social companies appears to be rising among young people. College students from 10 universities in Seoul formed a club last year that arranged visits to social companies. The club was formed by Han Sang-yeob, 23, a graduate from Yonsei University.

But experts say the country’s whole support system needs to undergo more trials in order to reflect what’s going on in Korea, as the support system itself was copied mostly from cases abroad.

“Some social companies have already become too bureaucratic. You can see how power games are played when employing people,” said Lee Hong-jik, a professor of social work at Kangnam University.

Government officials say they need more time to refine the current support system. “Some of the companies have problems but the system itself is still not complete. It was only introduced a year ago,” said Na Young-don, an official with the Labor Ministry.

Hwang Jeong-eun, an official with Samsung’s volunteer organization, stresses that social companies need to be run well. “You have to ask yourself how many of these companies that receive government aid can survive on their own,” said the official.

“Most social companies do not teach how to catch fish. They are still at the stage of feeding fish.”


Sister doing it for herself, and people with needs

Sister Jo Jin-won has mixed business and social responsibility for the past six years.

She is the chairwoman of We Can, a social company that employs people with special needs to manufacture cookies.

Jo, who became a nun in 1984, was named CEO of We Can in 2002, a year after the company was set up. At first, she had to decide whether to say in the advertisements that the cookies were made by people with disabilities. She decided not to.

“I didn’t want to give the impression I was selling the products forcefully,” said Jo. “We were not planning to be a one-time business. We planned to be in for the long run.”

Jo said she wanted to make cookies that were well known for their taste, not because they were made by people with special needs.

We Can also operates a program that aims to help people with special needs so they can interact with society better.

The sister said she focused on quality, a factor she saw as crucial to survival. On the advice of a professional in the confectionery business, she bought metal detectors to help scrutinize the cookies before packaging.

In addition, the cookies are made of domestic wheat with no chemicals added.

Feeling the need to gain some professional knowledge, Jo earned an MBA in 2006 through a college in Seoul.