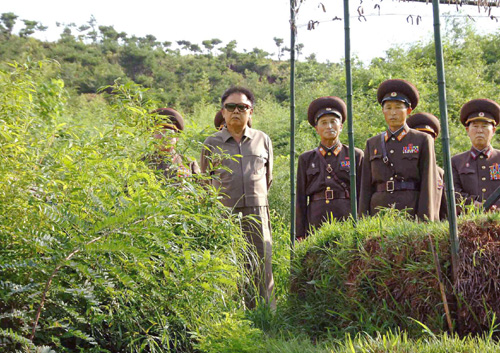 North Korea’s “Dear Leader,” Kim Jong-il, did not make an appearance at events celebrating the 63rd anniversary of the country’s Workers’ Party on Oct. 10.

This was the first time he failed to show up - remarkable in a country where on-the-spot guidance by the leader plays a big role in maintaining control of the government.

In Japan, there are many active Kim Jong-il watchers, people who collect information related to the reclusive leader of North Korea and provide them to officials of the foreign ministry or the justice ministry who deal with security affairs.

Some of these watchers live permanently in Chinese areas bordering North Korea to collect information on the North. They travel around China, Southeast Asia and Europe to trace the whereabouts of Kim Jong-nam, Kim Jong-il’s first-born son and one of his possible successors.

Japanese intelligence authorities even gather unconfirmed rumors circulated through underground tabloids put out by shadowy groups and check information they collect against these.

They also compare the information with what is gathered from the United States or Chinese intelligence sources. If they match, they are a great help to Japan’s North Korea policy.

Some of these analysts claim that Kim Jong-il maybe dead, pointing out that his voice has changed a lot compared to 2000.

These watchers insist three or four lookalikes are pretending to be the leader. One Japanese university professor claimed that Kim had died four years ago.

There’s a lot of classified information, rumors and reports surrounding Kim Jong-il are circulating, but one thing is clear: Not one of the rumors has been confirmed. Neither has the theory that he suffered a stroke recently.

The Korean government said that Kim Jong-il underwent brain surgery and has recovered enough to brush his teeth, but there is no way to confirm whether this is true or not - there is no evidence to confirm it.

The Korean Central News Agency released photographs of Kim visiting a military base on Oct. 11; many quickly threw doubt on the authenticity of the photographs.

The fall of the Berlin Wall, whose 20th anniversary will be celebrated next year, did not happen suddenly.

It was made possible because as talks between East and West Germany continued, the East German people’s desire for democracy grew stronger and there was cooperation from international society.

As these efforts accumulated, a commemorative event for the 40th anniversary of the state provided an occasion for massive demonstrations that ended in collapse of East Germany.

At a concert, musicians read an anti-government declaration and it gave rise to protest rallies. The number of protesters snowballed and the wall came down on Nov. 9, 1989.

Nobody knows when, but something like this could happen suddenly on the Korean Peninsula.

It is important for South Korea to cooperate with the United States and China to minimize confusion, but the economic shock that will inevitably come afterwards will be beyond imagination.

The reality is that since the Korean economy is still in difficulty, we dare not prepare ourselves for such a situation. After all, unification is directly linked to the problem of cost.

The experience of Germany is a testimony to this.

Germany is still suffering from the aftershocks from the fall of the Berlin Wall, which seems like only a few days ago. It is acknowledged that the high unemployment rate in the former East German region and the cultural differences between the former East and West Germans are causing social instability.

Apparently there is also regional bias because they use different dialects and you can immediately tell which region the speaker is from.

The Japanese government is studying the German case as it prepares for the situation that will unfold after unification of South and North Korea.

Japan is, of course, planning for the evacuation of Japanese citizens residing in Korea in the event of an emergency on the Korean Peninsula, and Japan is also checking out measures to cope with refugees from North Korea.

When East Germany collapsed, around 2 percent of the population flowed into surrounding European countries.

In Korea, the commotion created by word about Kim Jong-il’s illness is only focused on whether Kim is still ill or recovering his health. Any incident involving Kim Jong-il faces intense guesswork over whether it will be the start of change in North Korea.

It is no less important than diplomatic and security preparations that we prepare ourselves against the shock of unification - having to deal with economic and cultural differences that will arrive like a tsunami - just as we prepare and keep an umbrella handy for that rainy day.


*The writer is the Tokyo correspondent of the JoongAng Ilbo.