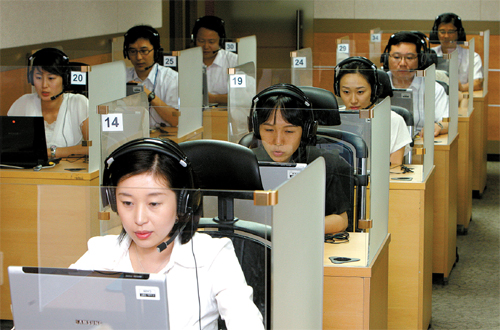 The number of Korean companies requiring job applicants to take tests for spoken English is increasing. By Choi Jeong-dong

He’d gone for a job interview at a multinational pharmaceutical company and was asked to answer the following question in English:

“If you had a chance to work with someone you really admire, what kind of work would you want to do?”

Yoon’s face expressed his perplexity. He could not speak a word of English.

Yet Yoon was no failure at English. He’d scored high grades in his written English tests at university and he had reached the standard English grade set by the company.

Worried for his future career, Yoon signed up for an telephone-based English language course after the interview.

Yoon’s story is hardly unique. When recruiting new employees, most Korean companies want to look at the candidates’ performance on Toeic or another performance test called the Test of English as a Foreign Language, more commonly known as Toefl.

But Korean employers are not satisfied with the current standards of English. According to a poll carried out last year by the Federation of Korean Industries, companies gave candidates 69 out of 100 for English speaking skills.

Worried about what they believe to be unsatisfactory English standards among potential hires, companies have devised new ways to distinguish between simple grades for written English and practical spoken English skills.

Increasing numbers of companies have incorporated a spoken English element into their recruitment process.

In a study by Job Korea, a recruiting company, 36.7 percent of 1,014 job seekers interviewed said they had been asked to speak in English during the recruitment process. That’s an 8.3 percent increased compared to last year.

In addition, 94.5 percent of the job-seeking respondents said preparation for an English speaking interview is crucial.

In fact, LG Electronics invited a teacher who was a native speaker of English to sit on its interview panel during recruitment last month.

Posco Engineering and Construction Company also tested candidates’ English speaking skills last month. It invited a native English speaker to its two-day training camp where job applicants were interviewed in English for a minimum of 10 minutes.

Other companies have opted to make certificates such as the Speaking and Oral Proficiency Interview-computer, or OPIc, mandatory.

This test was developed by the American Council on the Teaching of Foreign Languages and a local company, Credu.

The appeal of the OPIc is that it is cheap to administer and saves time.

Hyundai Heavy Industries and GS Engineering and Construction Corporation have made Toeic certificates in speaking a requirement since last year. Samsung, Doosan, LG and CJ followed suit this year.

However, each company is free to set its own bar. Samsung Group, for example, does not ask candidates to include certificates for spoken English skills with resumes and cover letters in applications for a post. Instead, if the candidate makes it to the second round of interviews, he or she will have to take the OPIc on the spot.

In its recruitment phase during the first half of this year, Samsung asked candidates to get a Toeic speaking grade above level 5 and an OPIc grade above Low Intermediate.

“If you are a Level 5 in Toeic Speaking, you can read public notices and advertisements,” said Choi Se-yeol from the Korea Toeic Committee. “It [Level 5] means you can socially communicate in English.”

Receiving the Intermediate Low level in an OPIc indicates that the candidate is able to converse in English, but with often inaccurate pronunciation or grammar.

Given the shifting priorities in the recruitment process, applicants are hunting for practical ways to hone their English skills.

According to Job Korea, 53.5 percent of job seekers said they don’t feel it is necessary to prepare so much for writing and reading tests for a new job. They prefer to study English abroad or in study groups as preparation for speaking in English during a job interview.

“Study groups [to improve each other’s English speaking skills] are formed everywhere,” said Han Hee-won, 25, a student. “There are also offline notices at library or boards.”

Lee Ji-yoon, a student studying business and administration at Ewha Womans University, is active in a study group. She spends all her weekend preparing for her English presentations.

“I was interning at a credit card company for two months last summer and had to give several presentations in English,” Lee said.

She and her friends meet once every two weeks for two hours. They also invite along a native English speaker to help debate current issues. They pay the teacher 40,000 won ($33.16) per hour.

“The money is worth it,” she says.

In addition to the English speaking study group, Lee Ji-yoon is enrolled in a Toeic writing and reading class.

That said, job seekers are often burdened by the extra costs involved in preparation for certain exams or interviews, especially when companies not only ask for English speaking certificates but also for writing and reading tests.

That’s the view of Shin Dong-il, a professor of English language and literature at Chung-Ang University. He is also worried that companies are pursuing a one-size-fits-all approach.

“Companies shouldn’t evaluate candidates with the same examinations and criteria,” he said.

“Instead, they should develop their own and tailor it to their own requirements and needs. This is a more efficient approach.”

Tongue-tied in an English test? These tips might help


Many job seekers are still unfamiliar with the Toeic Speaking and OPIc tests that companies like Samsung Group and LG Electronics now require.

The Toeic Speaking Test was launched in 2006, and OPIc last year.

The G-TELP Speaking test has been around since 1980, but not many people know it either. This test is mainly used by airlines to assess new flight attendants’ speaking ability.

Preparing for English speaking interviews may be complex. But there are simple rules that anyone can follow.

“For any test, beginner-level candidates should work on making simple sentences. Intermediate candidates should practice speaking for as long as they can with many different words,” said Professor Shin Dong-il from Chung-Ang University.

He advises beginners to practice reading out loud and that people at the intermediate level speak about a certain subject for a minimum of five minutes.

“The natives who mark speaking tests are generous with foreign accents,” Lee said. “Pronunciation isn’t even on the evaluation sheet.”

Lee says rather than worrying about pronunciation, it is more effective to have your own speaking rhythm. “Read aloud with Toeic listening tapes,” said Park Jung-su from YBM Language Institute.

Candidates are asked 11 questions over 20 minutes. Questions are divided into six categories, including describing a picture and reading an English paragraph.

Topics of conversation are mainly about daily life. Each question should be answered within one minute. The test is held once a month and costs 66,000 won ($53.27).

Candidates can choose their own topics. For example, if you choose “films,” you are asked questions about films. Descriptions should be as detailed as possible.

About 15 questions are asked over a 40-minute period. There is no time limit per question so candidates must manage their time. The test is held six times a month and costs 71,500 won.

Candidates are evaluated on 11 criteria, including introducing themselves, describing something, creating a story and comparing two objects.

Candidates are asked 30 questions over a 40-minute period. Each answer has a time limit.

Pronunciation and grammar are important. The test is held four times a month and costs 65,000 won.