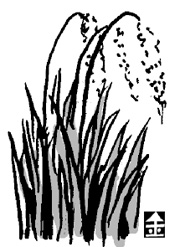 Rice paddies have many roles besides the simple production of rice. As rice season coincides with the rainy season on the Korean Peninsula, paddies greatly help to reduce the negative effects of floods.

If water is stored at a height of 27 centimeters (10.6 inches) over a total of 9,400 square kilometers (3,629 square miles) of rice fields nationwide, the total will exceed 2.5 billion cubic meters, 17 times more water than is held by the Chuncheon Dam. Water stored in a rice paddy also soaks through the soil and fills up underground reservoirs.

In addition, the water sitting over the paddies evaporates in the heat of summer and helps to cool the air.

The rice paddies can also play a pivotal role in reducing greenhouse gases because carbon dioxide emissions are absorbed as the rice grows to maturity - up to 13.8 million tons of carbon dioxide nationwide on average.

It is estimated that if we sell these carbon credits at 15 euros (27,5000 won) per ton under the EU Greenhouse Gas Emission Trading Scheme, then we could earn as much as $276 million.

However, the paddies also emit another greenhouse gas - methane - which is a by-product of the mud in the rice fields.

Recently, people are paying greater attention to the importance attached to rice paddies and rice farming, particularly in response to issues of food security due to skyrocketing global food prices. The soaring food prices were not only due to a large increase in biofuel production, but also because of the decrease in land devoted to rice paddies in China and India, which sharply decreased global rice production.

The total land area of rice cultivation has dropped 26 percent in the past two decades in Korea, and an increasing number of farmers are likely to give up farming as revenues shrink with the increase in rice imports. One expert predicted that it will decline a further 25 percent by 2015.

In addition, rising temperatures due to global warming will harm rice farming.

The Lee administration has been embroiled in controversy over rice farm subsidies. At the same time, we are now in a miserable position to build a base for food farming overseas due to soaring food prices.

Rice farm subsidies are not bad in and of themselves, despite the recent scandal, considering their importance to the people of our country.

Commemorating World Food Day, we need to regard rice paddies as resources for life, rather than for speculation.