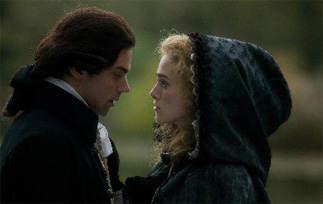 Aretha Franklin’s “Think” would have been all wrong on the soundtrack of “The Duchess,” the luxurious new costume drama out in theaters. The film is well served by its cascading harp score, but the Queen of Soul sure does capture the underlying themes of the film with her roaring lyrics.

In late 18th century England, the film reminds us, women had very little freedom to speak (or sing) of. Director Saul Dibb, a co-writer of the screenplay, chooses to illustrate this point through the unfortunate life of Georgiana, the Duchess of Devonshire, played by Keira Knightley.

On her wedding night, as her new husband (Ralph Fiennes) complains about her complicated garments, she answers that fashion is one of the only ways women can express themselves, while men have many other means.

The film’s tagline used on some posters and trailers is “There were three people in her marriage.” Knowing in advance that Georgiana is the younger, more popular and more beautiful half of her marriage - and the fact that the trailer features a steamy scene with Knightley, sans Fiennes - viewers would assume that she’s the one being unfaithful.

But in fact, as the film progresses, Georgiana learns that she is the one being cuckolded. As a friend says in one scene, “The Duke of Devonshire appears to be the only one not in love with the Duchess of Devonshire.”

Forced to live in an increasingly dire situation, compounded by her difficulty in bearing a son, Georgiana finds herself desperate, and she eventually finds solace in an old friend, Charles Grey (Dominic Cooper, of “Mamma Mia!” fame). As expected, the social restrictions of the time prevent Georgiana from indulging herself in the very same way as her husband.

Knightley, whose tortured character increasingly yields to histrionics, bears stark contrast to the stoic, cold Fiennes. Unsurprisingly, Dibb chooses to depict Fiennes as the ultimate villain, rarely letting him show the debonair charm that has made him the leading man in a handful of older films.

The cinematography is truly lovely in The Duchess, with sweeping landscapes of Bath and country estates. And as a costume drama, the wardrobes are appropriately stunning. (In Cooper’s case, he’s stunning once he loses his costume.) But what failed to impress me was the film’s emotionally dry performances.

Knightley as Georgiana does have her painful moments, such as when she’s de-wigged at a society soiree, but in scenes that should be truly heartrending, I found myself just as stoic as Fiennes’ Duke of Devonshire.

This performance as a whole convinced me that Knightley is at her best when she loses the bustle and bouffant. Made painfully obvious by a recent commercial on OnStyle, much of Knightley’s career has been cloaked in elaborate costumes, from “Pride and Prejudice” to “Pirates of the Caribbean.” And yet, what are my favorite movies that feature her? “Bend It Like Beckham” and “Love Actually” - despite a few cringe-worthy lines.

That being said, as I left the theater, I was struck by how lucky I am as a woman to be living in the 21st century.