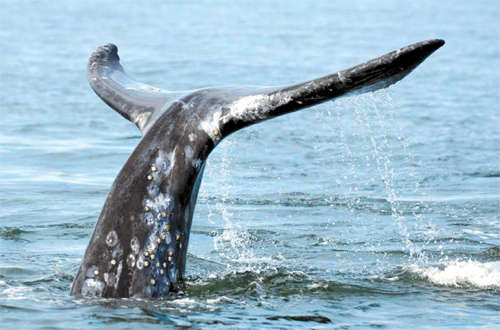 
Next time you are in Ulsan on the southeastern coast, look out to sea.

There’s a reward out for spotting a certain species of endangered mammal.

“Wanted: Ghost Whales!” cry out posters around town with a promise of 10 million won ($8,074) for sightings - dead or alive - and 5 million won for photos or video footage.

There have been no takers yet.

Korea’s Cetacean Research Institute, a group dedicated to research on whales, has been distributing these posters to fishing communities along this stretch of coastline since the beginning of the year.

The fliers describe in detail the physical and behavioral characteristics of the so-called ghost whale, a local name for the Western Pacific Gray Whale. 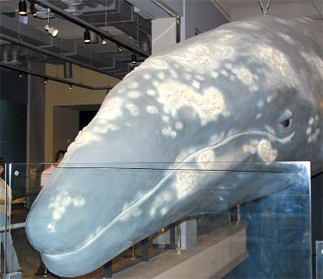 In 1947, they got full protection but in 2003 the International Union for Conservation of Nature was compelled to list the whales as “critically endangered,” the highest category of threat, on the IUCN Red List of Threatened Species.

They are also listed by the Convention on the International Trade in Endangered Species (Cites) as Appendix I, also the highest level of endangerment.

“We’ve received several images, but none of them clearly showed the whales,” said Kim Jang-geun, head of the Cetacean Research Institute, which comes under the National Fisheries Research and Development Institute.

“However, it’s very encouraging how the fishermen are now aware of the scarcity of the whales and are joining in our efforts to protect and preserve them.”

Besides the reward offer, scientists at the institute have been running an on-site survey every winter since the institute was set up in 2006. They believe the whales swim into Korean waters during the colder months to mate.

Western gray whales are believed to migrate between the Sea of Okhotsk off northeast Russia and the East Sea off southeastern Korean shoreline.

In 1912, an American explorer named Roy Chapman Andrews (allegedly the model for the fictional adventurer/archaeologist Indiana Jones) discovered a gray whale in the East Sea off Ulsan, southeast Korea.

Two years later, he wrote a paper on the whale referring to it as the “Korean gray whale.” 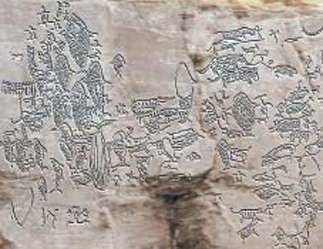 The western gray whales were thought to be extinct in the middle of the last century, but in 1977, it was spotted in the Korean waters. This was also the last time it was seen here.

There are estimated to be just 130 of them remaining today, of which only 25 to 35 are females. In the last three years, five western gray whales - all of them female - were trapped and died in fixed fishing nets off the Pacific coast of Japan.

According to a population projection by global experts, this rate of loss of females will, if continued, will lead to the extinction of the entire population.

At a recent workshop in Japan hosted by the IUCN, whale experts from Korea, Japan, China and Russia - the countries whose waters the western gray whales are thought to migrate through - discussed issues related to conservation of the whales.

The workshop was a follow up to a 2002 workshop in Ulsan hosted by the IWC.

Ulsan was the center of the Korean whaling industry for many years and restaurants here still sell whale meat, though, technically, only if the animal has been caught “accidentally.”

The whale meat tends to come from the minke, which is not currently thought to be endangered.

According to the Korean scientists present at the recent workshop in Japan, the other countries’ experts were impressed with the efforts undertaken in Korea to work toward preserving the animal. 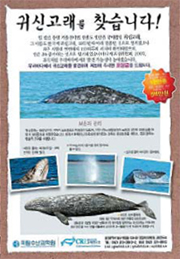 A wanted poster in Ulsan calls for reported sightings of western gray whales, an endangered species last seen in Korean waters in 1977. Provided by the institute

“Korea is the only country among those along the whales’ migration route to adopt such all-out public awareness measures,” said Kim Hyeon-wu, a researcher at the institute.

The IUCN will send out the recommendations that evolved from the discussions at the recent workshop to the governments of Japan, China and Russia, recommending that they pay $25,000 to anyone who reports captured whales, among others.

But whale experts say the western gray whale is more than just the matter of ecology to Koreans, but also their sacred culture and history.

“Among other whales, western gray whales stay the closest to the coast, so there are many accounts and anecdotes that old fishermen here have heard from their forefathers,” said Kim.

Throughout much of Korea’s recorded history these whales have been called “ghost whales.” When the animals surface among the rocks near the shoreline, they tend to disappear again, like ghosts, just as fishermen begin to approach them.

The whales have also been known as “devil fish,” a reference to the way the whales would fight when they were hunted, according to Kim of the Cetacean Research Institute, which is different to the nickname “ghost whales” given by Koreans. 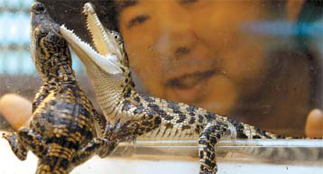 Whale experts in Korea are certain that the prehistoric rock engraving on the Bangudae Petroglyph in Ulsan (National Treasure No. 285) clearly depicts two western gray whales. The drawing is also one of the candidates for the supplementary design for the new 100,000 won notes slated to be issued sometime next year.

Meanwhile, as the Cetacean Research Institute works to raise awareness of the fight to save the western gray whale, Korea is working to protect and preserve other internationally endangered species.

Seoul Grand Park in Gwacheon, Gyeonggi, the biggest zoo in Korea run by the Seoul city government, has a total of 360 animal species, 153 of them listed by Cites as species threatened with extinction.

In August, the zoo welcomed very special new babies - two Siamese crocodiles. The Siamese crocodile is a medium-sized crocodilian found in the wetlands and waterways of Southeast Asia. They are severely endangered, virtually extinct in the wild, and listed by Cites as Appendix I. A pair was brought into Seoul Grand Park in 2004.

The recent birth is more special as it was the first-ever successful case of artificial hatching of the Siamese crocodiles in a Korean zoo.

“When I came to work, I saw a 0.5 centimeter crack in one of the 12 eggs. I took a set of forceps and induced the hatching,” said Lee Sang-lim, a reptile keeper at the zoo. “I was overwhelmed with joy. I have a baby myself, and it was just as awesome as a child’s birth.”

Three days later, another egg opened. The 10 other eggs failed to hatch, though.

The successful hatching of the endangered crocodile is deemed extremely difficult in a zoo, because of the different habitat and environmental elements.

That is why the previous attempt last year failed.

“We have done everything we could since then to make their new habitat similar to the original,” said Kang Hyung-uk, the chief of planning at the zoo.

“We changed the concrete floor into a soil-covered floor, planted palm trees, hoping to create tropical environment. This dome [where Siamese crocodiles are kept] can also bring showers and squalls to re-enact the monsoon season of the Southeast Asia,” Kang said.

The keepers also made sure the right temperature and moisture levels could simulate the nest conditions found in the wild during the incubation period.

When the eggs were laid, on June 2 this year, the zoo decided to hatch them using artificial methods because natural hatching last year had failed.

Earlier this month, the zoo officials publicly showcased the two babies and designated the Siamese crocodile as the Animal of the Month.

The delay in making the announcement was because the zoo typically waits a month or so to make sure the animal is in good health.

The latest birth is just one of several endangered animals born at Seoul Grand Park.

Until the Sept. 30 of this year, 24 types of endangered animals were born. This is up from last year’s 19. Included are a white-tailed sea eagle, four cranes, two Oriental storks, two leopards and a white-handed gibbon.

In 2000, the zoo launched a Wildlife Conservation Project for Endangered Species, which sets out to induce either natural or artificial reproduction of endangered animals.

“The chances of survival in a zoo are higher than in the wild, but the chances for successful reproduction in an artificial environment like a zoo are much lower,” said Mo Eui-won, the director of the zoo.

“The most well-known functions of a zoo are, of course, exhibition and education, but these cannot happen without the animals reproducing. So inducing healthy reproduction of these endangered animals is undoubtedly one of our primary goals.”