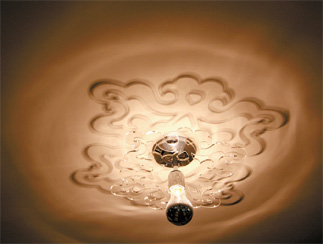 To fashion designer Choi Bok-ho, traditional patterns have long been a major source of inspiration. He says the patterns contain a sense of aesthetic beauty and sorcery, which reflect shamanism, Korean traditional belief in the spirit world.

“Korean patterns are representative of traditions and customs that are handed down through the ages,” Choi said.

Though it’s been over two decades since Choi started using traditional Korean patterns in his works, it’s only recently that the public has taken much notice.

Interest began with the development of digital textile printing technique in the mid-1990s. The new technique has allowed fast printing from the computer.

“Instead, it’s about reinterpreting and recreating the patterns that fit modern tastes and trends.”

Choi is now a prominent figure in the fashion industry; sales of his work bring in more than $200,000 a year.

In 2007, he was invited to China’s Fashion Week where he presented a collection of patterned prints.

His works were also showcased at the annual Pret A Porter in Paris and the International Brand Clothing and Accessories Fair in Shenzhen, China.

“The traditional patterns in the design charms buyers from the Middle East and other Asian countries,” he said. “Not only are the patterns indigenous but are high in product value.”

Patterns engraved in his collections are mainly natural elements, such as the sun, moon, clouds, water and birds.

In fact, traditional Korean patterns, which can be traced back to prehistory, show a strong influence of nature.

People probably first started drawing patterns to escape anxiety and fear, perhaps because they felt insecure looking at blank paper or empty space without anything drawn on it.

At first, most patterns were simple geometric shapes but later on they developed into curves and images, reflecting the spiritual beliefs prevalent at the time.

Most patterns were of nature and fantastical creatures: goblins, dragons, fish, phoenix, lotus and mountains. 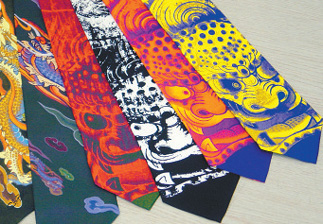 Tigers were embroidered on the chest and back of the uniforms of high-ranking military officials and important architects.

The animal was believed to block out all evil spirits.

Dragons decorated the garments of kings and queens as a way of marking heaven’s mandate.

Phoenixes were printed on the queen’s garments, since they were considered the wisest among birds.

It was said that when a phoenix flies, other birds follow.

Patterns that tell historic and folk stories are seeing a revival today.

Asked why, Kim Young-ok, head of Rodemn Architecture, points out that “modern-day Koreans constantly search for something new. Many young people are unfamiliar with traditions in Korea and find them charming.” 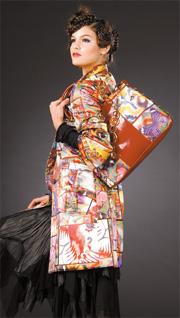 Last Chuseok, Korean Thanksgiving, the company released a special traditional alcoholic drink that had a picture of Kim Hong-do’s “Roaring Tiger” printed on the box.

According to Ko Bong-hwa, a team manager at Kooksoondang, sales increased 28 percent.

“The design has proven to be very popular,” he said.

In another example, LG Electronics launched a special edition of air conditioners in 2006 decorated with patterns of samjoko, a legendary three-legged bird common to many parts of Asia.

Painted on murals during the Goguryeo Kingdom (37 B.C.E. - 668) it symbolized power, the sun, a guardian spirit and hope.

LG reinterpreted the historic symbol and today the bird is seen to represent bringing life and fortune to homes.

The Ministry of Culture, Sports and Tourism, the National Museum of Korea and the Korea Culture Information Service have been researching ways to extract traditional patterns from relics and transform them into modern forms of usage.

Next year, he is planning on organizing a public design contest that will include use of traditional patterns.