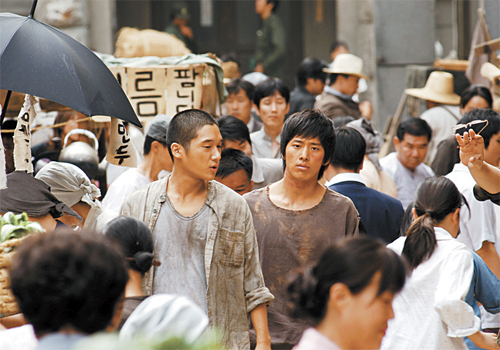 A post-Korean War scene in Bae Hyung-jun’s “Once Upon a Time in Seoul” with Song Chang-ui, left, and Lee Wan. Provided by MK Pictures

War is tough, a fact well known by a generation of Koreans caught up in the slaughter of the Korean War (1950-1953).

But despite the chaos of the weeks and months that followed the end of the war, the two teenage boys in the movie “Once Upon a Time in Seoul” learn never to quit.

Instead, Jong-doo (Lee Wan) and Tae-ho (Song Chang-ui) fight for survival during those difficult times.

The film is loosely based on Kenzo Kitakata’s “Scars,” a Japanese novel depicting the dark side of Japan after World War II. 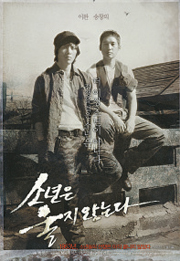 Rascal Entertainment, the company that made the film, thought the descriptions of impoverished Japan in the novel were similar to those that Korea experienced in 1953.

The story of Once Upon a Time in Seoul, however, goes beyond the simple retelling of wartime disorder.

“The film is an exploration of a man’s heart when life is pushed to its limits,” said the film’s director, Bae Hyung-jun, at the film’s production conference last Tuesday in Apgujeong, southern Seoul.

The movie questions life’s essential values and looks at how friendship and trust help see people through tough times.

Though Korea has transformed into a modern society, a far cry from the desolation of the 1950s, many people, especially the younger generation, face high levels of anxiety and depression.

For example, many teenagers today wander the streets searching for hope and vision, Bae said.

In the case of Jong-doo and Tae-ho, brotherhood is what matters.

The two 18-year-olds meet at a postwar camp after losing their families and all their money in the Korean War.

The two are not at all like each other in many ways - Jong-doo is aggressive and hot tempered, Tae-ho is rational and clever - but they team up and start to steal smuggled goods from American soldiers and plan their escape from the miserable camp.

With the money they make, they open a street stall and start selling the stolen goods. Other orphans in the neighborhood join in the business.

But making the movie was problematic because the actors had to transform themselves into believable characters from that period of history.

Song had to lose 7 kilograms (15.4 pounds) and shave his head to look shabby enough for his part while Lee had to hide his muscles and look much weaker.

“I was born and raised in the 1980s, so it was difficult for me to feel a connection with the postwar period,” Lee admitted.

All he could do was immerse himself in the script.

The child actors who played random orphans living off the streets also faced a generation barrier.

“Most child actors who came to the audition for the roles were too well fed,” Bae said. “It was difficult finding kids thin enough to look like skeletons who had survived a fierce war.”

According to the director, most child actors come from upper-middle class families and know nothing about poverty, destitution and malnutrition.

“The kids in the film had to look desperate for food and nutrition, but it was the opposite,” he said.

The only solution left to express passionate hunger was to ask the child actors to cut down on the amount they ate before the shooting. Sometimes, even starving them wasn’t enough and many scenes had to be reshot over and over again.

“For those who know me, this film may come as a surprise,” Bae said.

So far, the director’s short and long films have mostly been romantic comedies. Once Upon a Time in Seoul is Bae’s second feature after the comedy “Too Beautiful to Lie” in 2004.

This time he wanted to make a film about growing up, like Takeshi Kitano’s “Kids Return” (1996), a film that raises child bullying issues.

Once Upon a Time in Seoul opens next Thursday.