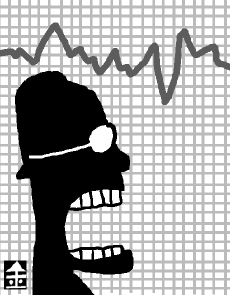 In 1970, former Soviet leader Nikita Khrushchev’s memoirs, “Khrushchev Remembers,” were published in the United States. But immediately after being released, debate raged over the authenticity of the tape recordings of the memoirs, amid rumors that the U.S. Central Intelligence Agency had fabricated them.

The publisher claimed that it got hold of tapes that Khrushchev secretly recorded after he was thrown out of power in 1964. But questions lingered over how the tapes, recorded while under house arrest, could leak through the Iron Curtain.

The issue was solved when the voiceprint was analyzed. The voice in the tapes and Khrushchev’s 1960 speech at the United Nations were compared and found to be identical.

A voiceprint visually shows the wavelengths that display a voice’s rise and fall, volume and resonance. Just like a fingerprint, each person has distinctive vocal characteristics. Lawrence Kersta at Bell Labs developed the first machine to analyze voiceprints in 1963. He recorded and analyzed the voices of 50,000 people and proved that each person has a clearly different voiceprint.

Nowadays, the analysis of voiceprints has been scientifically adopted as a decisive tool in identifying individuals. When taped messages from Osama bin Laden in 2001 and Saddam Hussein, in 2003, were broadcast, the CIA could verify that they were indeed authentic by analyzing their voiceprints.

Today many hypotheses are circulating about Kim Jong-il, who has not appeared in public for several months. Of these, Japan’s specialist on Korean affairs, Prof. Toshimitsu Shigemura’s argument that the North’s “Dear Leader” is dead, draws our attention.

Last summer, the professor published a book titled “The True Character of Kim Jong-il,” in which he claimed that Kim passed away in 2003 and that a lookalike has been playing the role of Kim ever since.

He cites as evidence that the voiceprints of Kim were completely different during the North Korea-Japan summit talks in 2002 and in 2004. But if that were true, it is questionable why it didn’t show up until now. We also have the North-South Korea summit talks of 2000 and 2007 recorded. We can simply verify the truth by analyzing Kim’s voiceprint of the two periods.

This makes me think that the fake news report claiming Kim Jong-il is dead, which spread over the Internet on Sunday, amounts to a mere publicity stunt for the book’s Web site. It makes us wonder about the true character of those who claim to be Japanese specialists on the Korean Peninsula.