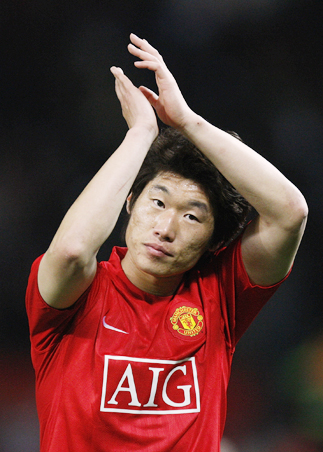 Arsenal and Lyon scored five and Villarreal got six, including a Joseba Llorente hat-trick, for an impressive haul of 36 goals in eight matches.

A Dimitar Berbatov double, and another goal from Wayne Rooney, set up Manchester United’s 3-0 victory over a tentative Celtic in Group E though Alex Ferguson’s men hardly got out of third gear at Old Trafford.

Arsenal’s 5-3 win at Istanbul club Fenerbahce put the London club at the top of Group G, and Villarreal’s 6-3 win over Bruce Rioch’s Aalborg meant they joined Manchester United at the top of Group E and Bayern Munich’s 3-0 victory over Fiorentina left them as the pacesetters in Group F.

Lyon are second in Group F following their 5-3 win at Steaua Bucharest.

The nine-time winners Real Madrid lost their 100 percent record and top spot in Group H, however, with a 2-1 defeat at Italian giants Juventus.

For United, Wayne Rooney’s ninth goal in seven matches for club and country, following Berbatov’s double, completed what was an almost embarrassingly comfortable victory for the defending champions.

The knock that forced Cristiano Ronaldo off 10 minutes from the end ensured it was not an altogether positive evening for United but Sir Alex Ferguson’s side now know a victory in Glasgow in a fortnight’s time will be enough to put them through to the knockout stages with two matches to spare.

For Celtic, with just one point from their opening three matches, the chances of survival now look slim after what was their 10th consecutive away defeat in the competition.

Celtic boss Gordon Strachan, who described Rooney as “unplayable” in his current form, admitted his side had been well beaten.

“Berbatov’s two goals were offside but I am not going to sit here and scream about them,” he said. “I am a football man and I know when I am beaten, well beaten, so does my team.”

Ferguson said the win was evidence of the added dimension that Berbatov has brought to his team. “It was fantastic, a marvelous performance again,” the Scot said of the Bulgarian’s display.

“He is bringing that composure to the final third of the field. Hopefully the combination is developing with not only Wayne but also Carlos [Tevez].”

When asked if his goals were offside, Berbatov said afterwards, “It is not my decision to make. I was there trying to score and I did score and that is up to the referee.”

Arsenal coach Arsene Wenger said the pace and technique of his team made the difference in a victory his side merited. Emmanuel Adebayor, Theo Walcott, Abou Diaby, Alex Song and Aaron Ramsey got on the score sheet against the Turks. AFP