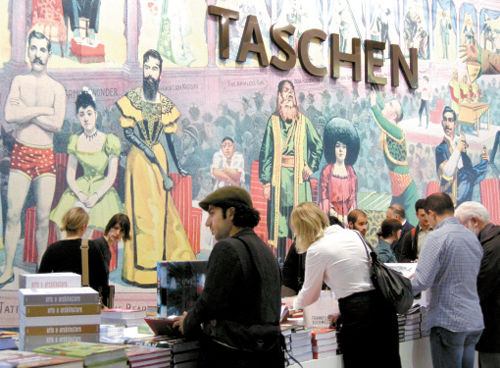 “Should books be published only using paper?”

The majority answered no.

The growth of the e-book market was at the center of much of the discussion at this year’s fair, the biggest of its kind in terms of publishers attending.

“Publishing companies can no longer neglect the development and usage of e-books,” said Gottfried Honnefelder, chairman of the German Publishers and Booksellers Association, which organizes the fair.

“Publishers should discuss new business models,” he said, adding a call for a political debate about handling issues related to intellectual property rights.

Publishers at the forum also had their eyes on China, next year’s guest of honor. Subjects for debate included how to implement copyright in China and electronic publishing.

“Many dealers were from the Middle East, like Saudi Arabia and Turkey,” said Kim Dong-hwi, the president of Yeowon Media, which publishes the Tantan series, a collection of educational books.

“We anticipate favorable deals at other fairs coming up in Mexico, Egypt and the United Arab Emirates,” Kim said.

Jung Jae-yun, the planning director of the Korean publisher Great Books, is also negotiating copyright deals with India, Thailand, the Philippines and Poland.

Meanwhile, the copyright for “I Have the Right to Destroy Myself” by Korean novelist Kim Young-ha was sold to France.

The Frankfurt Book Fair has a history dating back more than 500 years. Regular annual fairs began in 1949, and Korea first participated in 1961.

For this year’s book fair, 7,372 publishing companies from 100 countries visited and 402,284 books were displayed.