The city that stopped reading literature

The city that stopped reading literature 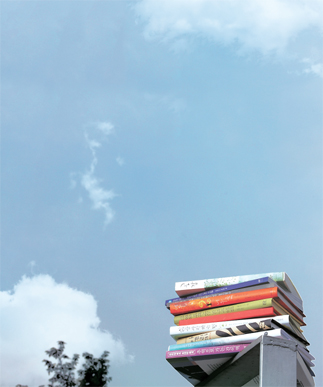 It was like a scene out of Alice’s Wonderland.

In Gyeonghui Palace in downtown Seoul, the sky was high and clear on a windless day early this month, children were sitting on the grass watching a puppet show about a fairy story or were making up characters and story lines for their own picture books.

Deeper into the garden, literary critic and former Culture Minister Lee O-young was giving a speech on living with creative minds. “Many adults have lost their childhood dreams today because we live in an excessively pragmatic society,” Lee said. “But you can bring back the dreams by reading.”

The children and Lee were participating in the inaugural Seoul Book Festival, a timely event since it seems that despite the obvious enjoyment the young people at the palace were taking from listening to and devising their own stories, books are in crisis in Korea.

According to a survey released by the Seoul Metropolitan government last month, 36.1 percent of the 48,207 residents of Seoul over the age of 15 hadn’t read a single book between Oct. 1, 2006 and Sept. 30, 2007, not including academic textbooks. The older the respondents were, the less likely they were to have read something. And only 6 percent of those polled named reading books as a leisure activity.

The aim of the Seoul Book Festival, organized by the city government and the Korean Publishers Association, was to help promote a more active reading environment and to celebrate Korea’s Book Day, which fell on Oct. 11.

Some 130 publishing companies displayed 700 books during the three-day festival. “What we need is a well-organized system of education on reading, even for adults,” said Yun Hyun-sook of the city government in response to the poll. “It’s true that forcing people to read can go against personal freedom and rights, but it is imperative that we develop a robust reading environment. It’s the only way to build a strong society.”

Yun said she is worried because the top three leisure activities in Korea appear to be surfing the Internet, watching television and playing digital games, fears borne out by data from the Ministry of Culture, Sports and Tourism that indicates the decline of the reading public. In 2004, 16.2 percent of the population’s leisure money was spent buying books. But in 2007, the percentage dropped to 14.9. In contrast, 24.9 percent of leisure money was spent watching films or performances in 2004, compared to 29.5 percent in 2007.

Naturally, publishing companies and bookshops are teetering on the edge of a crisis. There are 30,000 publishing companies in Korea but only 400 to 500 of them are able to publish more than one book a year. “More of these companies will close down over time,” said Lee Young-in from Hansung Publishing and Planning.

The situation for bookstores isn’t any better. There were 5,000 bookstores throughout the country a decade ago. Now there are only 2,000. Lee said this summer was especially critical for the publishing industry. “Though I cannot publicly state specific numbers on the sales rate decrease, many small publishing companies are suffering. Korea doesn’t have a big demand for reading, especially literary novels,” she said.

According to Lee, many publishing companies such as Hansung that used to publish literature are changing direction and publishing practical nonfiction books on business, finance and self-development.

One of the reasons for the downfall in reading, especially among adults, is lack of time. The Seoul survey suggests that you read less as you grew older. “With an overly eager education boom in Korea, parents are more than willing to read - that is, for their children,” Yun said. “Parents sacrifice so much time for the betterment of their children and education that they find it hard to spare time for themselves.”

People have been aware of the reading crisis for some time now and efforts have been made over the past few years to rectify the situation and try to create an environment more conducive to reading.

The Ministry of Education, Science and Technology invested 300 billion won ($265 million) from 2003 to 2007 in 6,000 public school libraries, and municipal governments around the country have implemented voluntary reading programs for children. In Daegu, for example, some schools spare 10 minutes each morning for reading.

“There are many programs to urge children to read but not enough for adults,” said Kim Yu-ri from Citizen Action for Reading Culture. She asks for more campaigns targeting adults, like the KTF Reading Marathon Competition last year. The telecommunications company rewarded bookworms with book vouchers if they completed the full marathon (42.195 kilometers, 26 miles) or half-marathon (21.097 kilometers). One book read counted as one kilometer.

“After the Korean War in 1953, many students and intellectual refugees were hungry for food for the soul,” Kim said. “What we need is this kind of hungry spirit for life’s wisdom that can be acquired by reading books.”