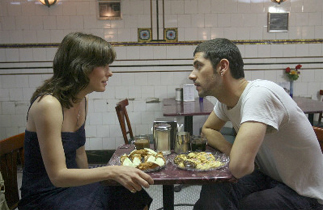 “Broken English” opens with a 30-something woman putting on makeup. She looks neurotic and uneasy, an expression she doesn’t shake from the first scene to the last.

This film is written and directed by Zoe Cassavetes, the daughter of director John Cassavetes and actress Gena Rowlands. It is her debut feature.

The plot is pretty simple, although I wonder if that was Cassavetes’ intention. Rather than an actual story line, the focus is on the heroine, Nora (Parker Posey).

Basically, she spends the first half of the film trying to find the right guy, and the second half trying to hold onto him.

Nora works as the VIP concierge in a boutique hotel. She has to deal with picky requests and complaints out of her stuffy, cramped office. Nora never communicates with her colleagues and is always alone in her office.

There are many reasons why a professional career woman cannot meet the right guy, but in the movies, there are only two reasons: she is either ugly or a workaholic.

But Nora is neither. And here’s where the questions begin. Everyone around her - including Nora herself - keeps asking why she hasn’t met Mr. Right.

The real question is, why do people immediately assume that if you’re single, you’re miserable? Perhaps Nora is impatient and neurotic not by nature, but because of the people around her.

She keeps falling for the wrong type, and after each disaster, she’s hurt and even more distrustful of men.

She meets a hot actor (Justin Theroux), who seduces girls for acting challenges and exposes them on national TV. Another guy (Josh Hamilton) turns out to still be smitten with his ex. Desperate, Nora tries Internet dating, but even that gets her nowhere.

But as always, the moment we decide we no longer want love, real love comes. Nora encounters a Frenchman named Julien (Melvil Poupaud) at a colleague’s party.

Julien is a seemingly nice guy. He is good-looking as well as attentive. And he likes her so much so that he asks her to go to Paris with him.

Nora agonizes over whether she should open her heart to Julien. But we know a happy ending is coming - she will follow him to Paris after all. Even if she has lost his phone number and every other guy is called Julien, she ends up meeting him on the way to airport.

And so when Nora accepts his invitation for another drink and Julien says, “But you know you’re gonna miss your flight?” Nora answers, “I know.”

Broken English is a cliche of a film, but so sweet it can be forgiven.