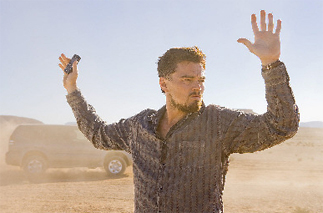 As CIA operative Roger Ferris, Leonardo DiCaprio finds himself in a number of sticky situations in “Body of Lies.” [MovieWeb]

Judging by his stellar performances in the past several years, I had come to the conclusion that Leonardo DiCaprio could do no wrong.

After watching “Body of Lies,” I can still make the above statement, but only if you’re talking about his acting. In terms of script selection, Leo seems to have taken a misstep with this latest Ridley Scott-directed film, which could be described as a thinker’s action flick.

It’s not that the story line, adapted from a novel written by Washington Post columnist David Ignatius, is bad. In literature, an author can take his time revealing the crux of the story, drawing the reader in with slow exposition a la Ian McEwan in “Atonement” (the novel, not the film).

But in film, we only have two hours, give or take, to identify the conflict, spend some time fixing it and then end with a satisfying resolution. Unfortunately, Body of Lies suffers in this regard.

While the real meat of this narrative is set in Jordan, Leo enters the picture as CIA operative Roger Ferris in Iraq. Only after several twists and turns does he even make it to Jordan, whereupon he putzes around for a bit before the real intrigue happens.

After a rash of terrorist bombings in Europe, and threats of those to take place in the United States, Ferris seeks to track down the Al Qaeda cell responsible. The CIA’s only lead is a safehouse in Jordan, which Ferris hopes to infiltrate with the assistance of the Jordanian General Intelligence Department head Hani (Mark Strong).

But, as Hani repeatedly reminds Ferris, trust is of the utmost importance in Jordan. And while Ferris is acutely aware of this fact, his handler, Ed Hoffman (Russell Crowe), chooses to ignore it. Thus, Ferris is stymied in earning Hani’s trust, but is at least able to win the suave Jordanian’s respect through his deep understanding of Middle Eastern culture.

In terms of performances, Body of Lies is really a one-man show. Crowe, as DiCaprio’s Ferris likes to point out, is a doughboy who’s seen better days. Most of his scenes are in a domestic setting, dropping his kids off at school while he coaches Ferris, who’s usually in the middle of a war zone.

Ferris’ love interest, Aisha (Golshifteh Farahani), is seen so seldom that you could hardly call her a significant presence in the film. Sadly, the same goes for Strong, who is so convincing as a Jordanian it’s hard to believe he’s actually ethnically Italian.

But Leo continues his streak of greatness, deftly maneuvering through gunfights and car chases, and remaining resolute even while facing torture. Ferris seems to be the only American with a conscience in this film, visibly disturbed by Hoffman’s disregard of fallen Muslim comrades.

But even the actor whom I would deem the best out there today can’t save this sluggish screenplay.

The only part that made me sit up and take notice was the finale, when the audience finally got a hint of the tension and vitality that should have run throughout the film. The resolution does admittedly involve some clever storytelling, but perhaps it would have had more impact with some cutting of the torpid introduction.


As CIA operative Roger Ferris, Leonardo DiCaprio finds himself in a number of sticky situations in “Body of Lies.”[MovieWeb]