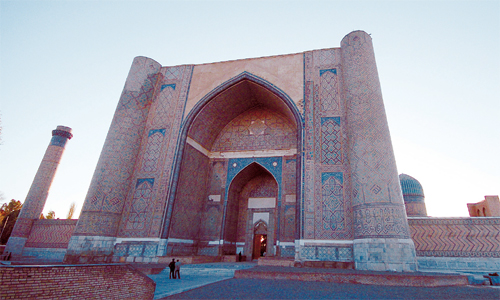 Bibi-Khanym Mosque, built by King Timur’s first wife, Bibi-Khanym, whom the king later had executed because he found love bites belonging to the mosque’s architect on his wife’s neck. Photos by Lee Ho-jeong

SAMARKAND, Uzbekistan - In a land where farmers still handpick cotton in the fields and doe-eyed mules pull carts through the dusty streets, Samarkand offers visitors a glimpse into the past.

Don’t expect to find a Starbucks where you can download tunes onto your iPod. This ancient city is like a huge, well-preserved museum with architecture of incomparable beauty and grandeur, its history stretching back to the days when trade flourished along the sections of the Silk Road that ran through this part of the Asian continent.

From the tile-patterned domes of the mosques to the Islamic writings that decorates the stonework, the city looks like a vision straight out of a story in “One Thousand and One Nights.”

One of the highlights in Samarkand, the second largest city in Uzbekistan, a land-locked country in Central Asia, is Gur-e Amir, which means the “Tomb of the Kings.”

The much-feared military ruler King Timur (1336-1405), also known as Tamerland, is buried in this mausoleum, along with his sons Shah Rukh and Miran Shah as well as grandsons Ulugh Beg and Muhammad Sultan.

The mausoleum is said to have been built in 1403 after the sudden death of Muhammad Sultan. Timur was buried here two years later.

From a distance, the design of the mausoleum looks simplistic. But when you get closer to the structure, the details of the mosaic patterns on the walls bring the building to life. 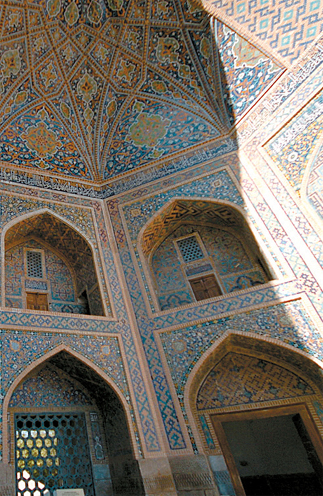 The interior of Ulugbek Madrasah in Registan,

The architectural highlight is the azure dome, which is 12.5 meters (41 feet) high and 15 meters in diameter, a design of perfect geometric beauty and a sight that dominates the skyline.

But it gets even better.

The interior sustains an astonishing beauty, experienced as soon as you enter the mausoleum where a cavernous chamber awaits.

This is where the tombs of the kings lie, an area that appears much larger and deeper than expected, exhaling a solemn serenity.

However, these are not the actual burial spots of the deceased royals. They are indicators and the actual bodies are probably buried much deeper in the rocks below, in graves covered up by the sands of time. 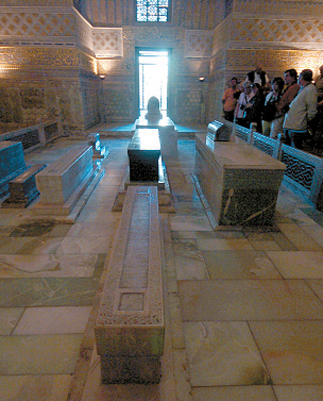 The royal tombs in Gur-e Amir.

Mir Sayyid Baraka, Timur’s teacher, is buried nearby, but not among the king’s bloodline. His tomb is distinctive from the others, not only because it sits alone but because there is a long wooden stick with a horse’s tail hanging from the end, a symbol of respect for men of learning.

The top corner arches are a web of complicated geometric carvings decorated in blue and gold. On the walls are inscriptions from the Koran.

Amid the elegant decoration within the chamber lies a wooden log near an arched window. This is a show of respect to Allah, meaning that no one is as intelligent as god himself. 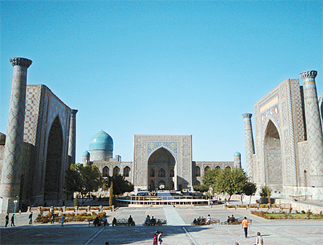 The three madrasahs in Registan in central Samarkand.

Not far from the mausoleum is Registan, which means “place of sand,” the center of the old city with three enormous madrasahs, where Islamic clergy taught philosophy and science.

The size of the madrasahs at Registan is overwhelming, even more so that the mausoleum.

As you look up at these incredible buildings, you can’t help but wonder at the effort and skill that went into building them.

Despite its superb appearance, Registan was not only where royal events and celebrations took place. This square has a bloody history. It’s where public executions were held, where the sand used to soak up the blood of the dead.

Interestingly when looking closely at the buildings, you can tell that instead of being geometrically aligned, the buildings tilt slightly to the side, not in the same direction but in different directions.

This visual anomaly is due to recent seismic activity that has jolted the edifice out of place.

On the exterior tiled walls of the Sher-Dor Madrasah (1619-1636), two tigers face one another. One of the tigers has an eye with a human face, which symbolizes that no other animal in the world is above a human.

The Ulugbek Madrasah (1417-1420) has a shaded courtyard where people can sit and relax. Inside, there is a place of prayer, and down a dimly lit hallway there’s a museum containing tools, plates and other utensils that date back to the 15th century.

There are also small rooms that were once used by the clergy but which now house souvenir shops.

Inside the shops, craftsmen weave carpets and make silk scarves in a small workshop, primarily for the benefit of tourists.

Another famous historical landmark worth visiting is Bibi-Khanym Mosque.

It is not as elegant or grand as the Gur-e Amir or Registan, but it has its own charm, more reminiscent of an actual ancient relic, like the Parthenon in Greece.

By size, this mosque stands shoulder-to-shoulder with the structures in Registan.

However, when you walk into the mosque through the simple entrance, much less decorated than the doorway into Gur-e Amir, you see straight away that the mosque is in a sad state of disrepair.

The walls are crumbling, wooden structures hang loose and sections of the ancient stone columns lie broken on the ground, unattended.

Even though the mosque no longer has an ostentatious look compared to the mausoleum or the madrasahs, it is filled with a nostalgic air, giving visitors a much stronger sense of antiquity.

Here history seems almost tangible, and standing within these antique walls, you can feel yourself transported back to the past.

This mosque was built after Timur went out to conquer India, between 1399 and 1404. It was built in honor of Timur first wife, Bibi-Khanym, hence the mosque’s name.

Legend has it that Timur’s wife built the temple to please her husband.

But during the construction process, the chief architect requested that the queen give him a kiss when the building was completed. At first she refused this cheeky request, but she finally gave in. But it seems the architect might have got a little carried away because, according to the story, a love bite was left on the queen’s neck.

On his return, Timur was pleased to find the mosque but less happy about the marks on his wife.

As you might expect, Timur, a warrior not known for his qualities of mercy, executed his wife, even though she clearly adored him.

In the middle of the mosque under a huge tree is a stone table. Here a huge Koran, which is now in a museum in Tashkent, was placed during prayers.

If you have time, the bazaar near the mosque is an interesting site to visit.

Hyundai Department Store it is not, but its unrefined hustle and bustle has been a fixture here for the last six centuries.

This untamed marketplace sells everything from the latest perfumes to the sausages and unleavened bread that are typical of this region.

With the mosque as a backdrop, reality and history blur as one here.

Since last month Korean Air has been operating flights between Incheon and Uzbekistan’s capital Tashkent three days a week, on Tuesdays, Fridays and Saturdays.

From Tashkent, travelers can travel to Samarkand by train. The bus takes four hours.

Bibi-Khanym Mosque, built by King Timur’s first wife, Bibi-Khanym, whom the king later had executed because he found love bites belonging to the mosque’s architect on his wife’s neck. Photos by Lee Ho-jeong

The interior of Ulugbek Madrasah in Registan, left, and above, the royal tombs in Gur-e Amir.


The three madrasahs in Registan in central Samarkand.