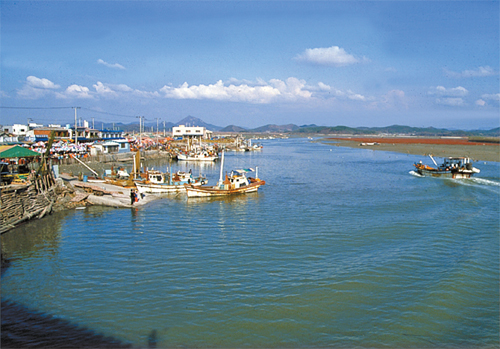 INCHEON - I’m trotting over Sorae Bridge, my feet crunching on the wire mesh that carelessly veils the old railway track. The passageway is barely wide enough for two adults and it’s no surprise that the railroad car that used to pass this way was called the “dwarf train.”

Below me lies a dreary mud flat at low tide, filling the air with the sharp scent of the sea, and right on the edge of the shore, piles of soju bottles mark where fishermen sat the previous day waiting for a bite.

It’s early morning at Sorae Port in Incheon, a city on the outskirts of Seoul and the hometown of my mother. As we work our way across the bridge, she’s telling me that we sat on the train that passed over the bridge 30 years ago. I was 3, and we were on a weekend outing to the seafood market here.

The memory of the Sorae train runs deep in the minds of many Koreans, but the sight of the bridge feels far from nostalgic. The handrail is covered in rust stains and if you look straight down through the wire mesh and the tracks you see straight to the ground. 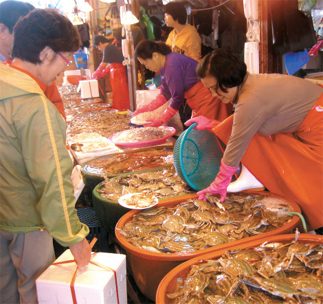 A stall selling blue crabs at the market.

But in 2001, thousands of concerned citizens signed a petition against the demolition of the bridge after the local government announced plans to replace the bridge with a subway route connecting Incheon with neighboring Suwon in Gyeonggi.

“The authorities must not remove the railroad track because it has great sentimental value for the people,” the petition read.

The demolition plan was never carried through.

Even now, you see elderly visitors holding their grandchildren’s hands and telling them about the old “dwarf” train, wistfully glancing back into the past.

However, the history of Sorae Bridge is not all rosy. Built in 1937 under Japan’s colonial regime (1910-1945), it was used to transport salt, which was later used to manufacture gunpowder during World War II.

After the war ended, the “salt train” stopped running, and the track was mainly used for tourists heading to the nearby fish market, which mainly sold jeotggal, fish fermented with salt. Up until the early 1960s, the port housed families made homeless during the Korean War (1950-1953), most of whom made their living here as fishermen.

The history of the bridge stretches back even further into the last years of the Joseon Dynasty (1392-1910). Near the bridge is a former artillery site built in 1879 during the reign of King Gojong (1852-1919) before Korea opened its ports to the rest of the world. Gojong set up a military post called Hwadojin here to ward off Western ships. The artillery site remained hidden until 1999 when a map of the site indicating three gun mounts was found in storage in the National Library of Korea.

Back to Sorae, about 15,000 people a day reportedly traveled on the train during the market’s heyday, when it was one of the country’s largest seafood markets.

That fame has not died. On a recent Sunday morning, the place was bustling with visitors from the city, who headed home with Styrofoam boxes packed with crabs, prawns and other seasonal seafood. 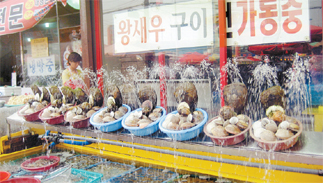 A display of clams at restaurants where customers grill their own purchases. By Park Soo-mee

The atmosphere is redolent of a traditional Korean market. Inside a long tunnel leading to the bridge, women sell old-fashioned snacks that are mostly gone from the streets of cities in Korea: grilled rice cakes, steamed shellfish and barrels of makgeolli, or rice wine, served with pig crackling in a chilli sauce.

Live crabs and squid are crawling out of colorful plastic buckets and a basket of prawns fresh from a barge is sold for 30,000 won ($22) a kilo during the peak autumn season. And diners sit grilling the clams and prawns that the wait staff carry over to their rickety tin tables.

The weekend market often borders on pandemonium. The path is narrow and the crowd is immense. A chorus of merchants sing out their bargains - not to a particularly harmonious tune. Over makeshift PAs, a soundtrack of rhythmical trot music, old-time Korean pop, competes with the braying stall holders.

On top of all this, the aroma of fermented fish, the main seasoning in kimchi, is carried aloft on the breeze. The scent is like nothing you’ve ever experienced. Although the liveliness is often considered the market’s irresistible charm, it could get overwhelming if you’re not attuned to the style.

But for the most part, the scenery is warm and pleasant.

“This is my husband’s hometown, and for him, it’s a place to freshen up and wash away his worries,” says Chung Ku-hye, 38, a resident of Incheon who went to the market with her family last week. “He grew up here catching clams and baby octopus on the mudflats. We buy crabs here, and my mother in-law makes awesome pickles.”

Visitors to the market also come to indulge in a seafood brunch. In restaurant alleys, women sell fried shrimp and squid snacks. Steamed blue crabs and grilled prawns are really popular, too.

But during the autumn, most restaurants lure their customers with the roasting aroma of jeoneo (gizzard shad), which literally means “money fish” in Chinese characters.

It’s supposedly the only fish that is not a waste of money, according to Koreans, because it tastes so good.

There is even an old Korean saying that a daughter-in-law who has run away will eventually come home because she longs to smell once more roasted gizzard shad in the autumn.

Gizzard shad are rather small, about the size of your palm, and they’re eaten both grilled and raw.

From now through the end of October is the peak season, when the concentration of fat in the gizzards peaks, allowing the flesh to taste soft and sweet.

And with the aroma of roasting fish and traces of a dwarf train, the market still remains a nostalgic trip for many Koreans.