[BOOKS in brief]An upbeat picture of the new order

[BOOKS in brief]An upbeat picture of the new order 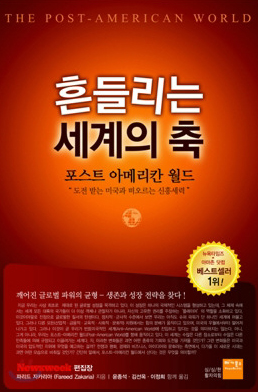 Unlike pessimists who bemoan the decline of the United States, Fareed Zakaria sees the “rise of the rest” as a phenomenon that will reshape the world.

In “The Post-American World” Zakaria, who is currently editor-in-chief at Newsweek International, argues that with the rise of China, India, Russia and Brazil will come a change in global power structures.

Although this does not mean the fall of the United States.

He bases his arguments on the premise that the U.S. is buoyed by an excellent educational system and the influx of young immigrants, who give the U.S. a more youthful demographic than Europe and much of Asia, where workers support an increasing population of unproductive elderly.

Also, unlike the Asian style of education, which focuses on rote learning and passing exams, the U.S. pursued a system that developed critical thinking, which makes their education policy excel.

How can the U.S. retain its power?

Zakaria argues that Washington’s best strategy is to do as Bismarck suggested, “accommodate, rather than resist, these modernizing states, allowing them to become stakeholders in the new order in exchange for their strategic cooperation.”

He believes that the U.S. should evolve from old ways of thinking, giving up its unipolar pretensions, engaging other great powers, and championing rules and institutions that are forged out of compromise and mutual adjustment.

Zakaria holds a bachelor’s degree from Yale and a Ph.D. from Harvard.

He was the youngest chief editor at Foreign Affairs magazine and, with his realist stance, has been compared to Henry Kissinger in terms of foreign policy nous.