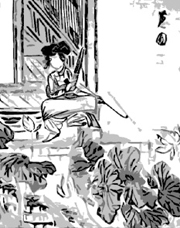 The genre painter of the late Joseon Dynasty Hyewon Shin Yun-bok (1758-?) stands decisively at the center of Korea’s cultural arena these days.

The novel “Wind’s Garden” features the painter and became a best seller and a highly popular SBS drama, currently on TV.

Next month, the movie “The Drawing of Beautiful Women” is in the lineup, and thousands of people recently swarmed to a special exhibition of Shin’s paintings, including his “Drawing of a Beautiful Woman,” at Gansong Art Gallery.

Shin’s rise as a cultural icon lies in the exceptional yet mysterious fascination with his life. There is almost no official record of Shin. We only know that he was kicked out of government for painting vulgar pictures. There are theories as to whether he really belonged to an official painting body. However, he enjoyed painting gibang scenes, where high-class men would be entertained with song and poetry, an unprecedented subject for art then.

In the TV drama, the painter is a woman dressed as a man who feels affection for her male master, Danwon Kim Hong-do. The drama has been spiced by establishing that King Jeongjo, who wanted to see the lives of ordinary people through Shin’s paintings, financially supported the artist.

Of course, Shin was male and the theory goes that he was highly influenced by Danwon. In another novel, “Color Sharaku,” Shin is the genius painter Sharaku Tosushai, who appeared and disappeared like a comet in Japanese art history.

The appeal of Shin’s work lies in his sophisticated brushwork and bold colors to depict married women’s repressed sexual desire.

If Danwon’s genre paintings were praised early on for humorously drawing the lives of common people, Shin’s paintings have been discovered belatedly by modern art lovers.

In reality, Shin is famous for drawing bold obscenity.

In the drama, it is King Jeongjo who gladly accepted Shin’s drawings when original real landscape drawings, divorced from the influence of Chinese imaginary landscape drawing, began to flourish. “During the late Joseon Dynasty, when [artists] began to appreciate nature through travel accounts at Mount Kumgang, they began to recognize and give artistic form to sex,” Kim Heon-seon, a professor at Gyeonggi University, wrote. This is the background against which obscene paintings, genre paintings and real landscape paintings appeared in our painting history, which all started with a recognition of the individual.