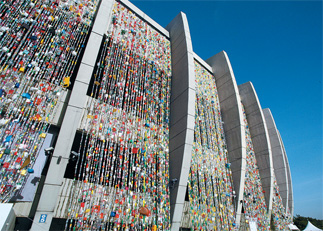 They were clustered around a giant object shaped like a xylophone with each key painted a different color.

Curious children struck the keys, and waited, but they didn’t make any sound.

The object turned out to be a designer-made bench, one of the winning works selected from an open call for local designers for the Seoul Design Olympiad, an ambitious project hosted by Seoul city government to turn the city into a leading design capital.

Held under the theme “Design is Air,” the event marked the designation of Seoul as world design capital 2010 by the International Council of Societies of Industrial Design Conference. 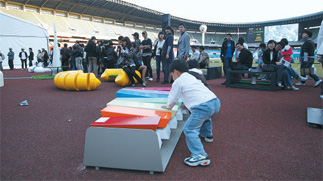 When we got to the stadium, a blue mascot doll approached us, introducing himself as “Arrrrr..ng.”

The mascot doll was taken from a character out of an indigenous myth.

The olympiad was divided into four parts: a conference, the main show, a festival and an open call for local designers.

Kwon Eun-sook, the director general of the show, explained that the event focused on introducing many young designers and smaller firms to the rest of the world.

The entire stadium compound underwent a complete facelift for the exhibition. 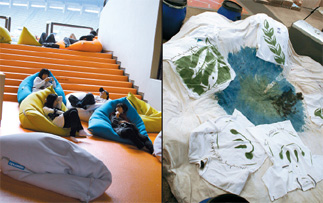 With the help of people living nearby, installation artist Choi Jeong-hwa wrapped the entire stadium in a plastic cover made out of recycled trash, underscoring the show’s theme of stainability through participatory “junk art.”

Another component of participatory art were the air tubes that decorated the exhibition hall space.

One of the most eye-catching displays was Bill Price’s air dome, which was shaped like a giant caterpillar.

Walking further, local enterprises like Hanwha and Inno Design set up their own booths. 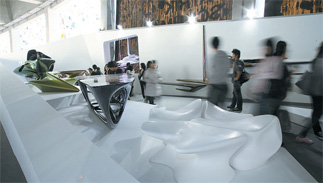 Amorepacific created a simulated the atmosphere of an eco-forest using pine tree fragrance.

“It is interesting to see artists who have produced their own unique designs. They inspire me to be more creative in my design works,” said Kim Eun-jung, a web designer at the “Design is Air’ exhibition.

Yoon Ho-seob, a design professor who is known for his environmental works, created a booth called “Green Canvas” where he gave out free homemade T-shirts.

Many design products in the show used everyday objects including a refrigerator made from bricks of salt. 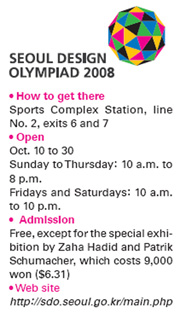 “I hope that my work here can raise awareness about the importance of environmental protection and at the same time let people have a good time,” said Yoon Ho-seob, a professor at Kookmin University.

The exhibition drew special attention from parents. Many artists incorporated interactive components that younger visitors could freely touch and play around with.

A welcome contribution for the weary was “Design is rest,” where people could take off their shoes and relax, surrounded by artist-designed sofas.

One of the highlights of the show was devoted to the exhibition of “Seoul Table and Seoul Desk” by Zaha Hadid and Patrik Schumacher.

Hadid uses the motif of the geography of Seoul in her work, said Shin Ji-yeon, a volunteer docent.

Overall, though, the show felt incomplete.

A lack of directions, signs and maps in the exhibition space made it hard for visitors to find their way around the huge stadium, and despite an ambitious aim to make the event a world-class festival, the number of international booths was limited to overseas design books and a few projects by foreign universities.

There was also criticism that a design event organized by the local city government - and not the designers themselves - lacked a creative motive.

There was also some grumbling among participants when Hadid, who was supposed to attend the conference, canceled the trip at the last minute.

For others, however, the event was meaningful.

Kwon, the director general, noted that the festival received positive responses particularly from design students, because the show touched on a huge variety of topics and designers.

“I hope visitors enjoyed this event since public access is very limited in spaces like the stadium otherwise,” she said.

Here are some tips for you to fully enjoy the exhibition.

Because of the show’s large scale, read through the pamphlet before the tour.

Know what you want to see, and get recommendations from the information desk.

And decide on your tour route before you start looking.