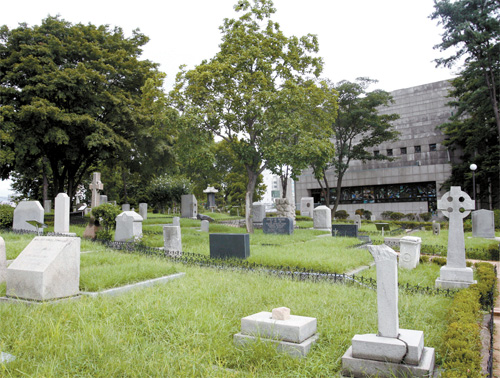 This is the first part of a new series that takes a look at some of Korea’s most sacred places.

This inscription is engraved on a headstone at Yanghwajin Foreigners’ Cemetery in Hapjeong-dong, Seoul, near the Han River.

Who was Paine? What was her life like in Korea? How long did she live here?

A walk through any graveyard is a poignant experience, a time to reflect on life and death. It can be a humbling experience.

This cemetery, in Mapo District, is especially interesting because of the impact the men and women here have made on Korean society, and whose influence is still felt today.

There are 413 tombstones here, of which only 143 bear the names of the interred. The graveyard’s full name is the Yanghwajin Foreign Missionaries Cemetery, but less than 200 of those who made this part of Seoul their final resting place were actually missionaries.

The site was relatively unknown among Christians until last year when the Protestant community in Korea designated 2007 a revival year for the faith and promoted its hallowed grounds. 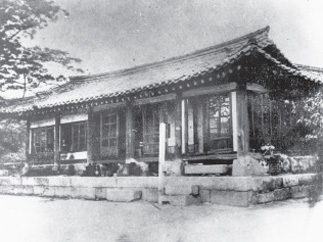 “It’s a place that shows the spirit of Christianity. These people [Protestant missionaries] came to a backward country and gave everything they had,” said Pastor Park Cheon-il, who conducts guided tours at Yanghwajin. “Many of them chose not to return to their home country but stayed here till their death and asked to be buried here. We have to honor their noble actions.”

There are many other sacred grounds in Seoul and other parts of the country, but the cemetery has special meaning because the missionaries buried here built a foundation for the Christian faith in Korea, Park added. “They had a significant impact on Korean society and became a cornerstone for today’s modern society.”

The first foreign missionary to be buried here was John William Heron, the first medical missionary sent to Korea by the U.S. Presbyterian Church.

In the summer of 1890, after only five years of service, Heron got infected with dysentery as he was treating people suffering from the disease. He passed away on July 26, 1890, and there was an immediate problem.

The scorching summer heat made it impossible to move Heron’s body to Chemulpo, now Incheon, where the only graveyard for foreigners was located.

Family members and other missionaries asked the U.S. diplomatic mission in Korea to arrange a burial site nearby, a request that gave birth to Yanghwajin.

Since then, many of the key missionaries and their families have been buried here, including the Underwood family, who founded Yonsei University and who have contributed enormously to the development of Christianity in Korea.

Members of the Appenzeller family are also interred here. Henry Appenzeller was the first Methodist missionary in Korea, the founder of the Chongdong Methodist Church in Jeong-dong, central Seoul.

He was also the founder of the Methodist Pai Chai Boys’ High School (today expanded into a university), the first institution of Western learning in Korea. 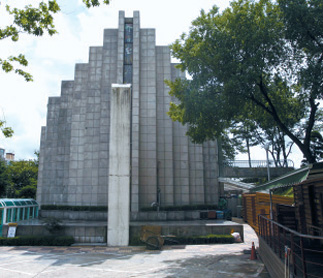 The Yanghwajin memorial hall in the cemetery.

Visiting the cemetery, visitors can attend classes in religious studies at the Yanghwajin Church or join one of the guided tours, which are available Monday through Saturday, starting at 10 a.m. in the morning.

The tours take place every hour until 4 p.m. The church also offers special lectures about the foreign missionaries buried here on Sundays at 3, 5 and 7 p.m., provided more than 20 people sign up.

The cemetery has been in the news over the past 12 months because of a dispute over ownership and maintenance involving two local churches.

Researchers say the first Protestant missionary to reach Korea was Nagasaka, a Japanese Christian who visited the country as an official in the Tokyo branch of the National Bible Society of Scotland. When he reached the southern port city of Busan in June 1883, Nagasaka distributed Bibles written in Chinese and Japanese plus portions of the Gospel and other Christian tracts written in Korean.

The idea to spread the faith to Korea was born when missionaries in Japan became acquainted with the ever-increasing number of Koreans who were there as foreign students.

The missionaries saw a chance to expand their work to young, progressive Korean intellectuals who were open to Western ideas.

Experts point out that the most influential missionary work in the country was initiated by religious groups from the United States. When missionary expansion in Asia was at a peak in the late 19th century, Korea was viewed as an extension of mission fields in China and Japan.

The first evangelistic agencies to begin missionary work in Korea were the Board of Foreign Missions of the Presbyterian Church and the Foreign Missionary Society of the Methodist Episcopal Church.

Starting almost simultaneously in Korea, these two organizations operated side by side and cooperated to some degree.

At this same time, a significant event took place that would have a profound impact on the missionary work in Korea.

Prince Min, a nephew of Queen Min, was brutally attacked during the Kapshin Chongbyon, a coup d’etat, in 1884. Allen was called in and through his intensive care, saved the prince’s life.

Needless to say this incident placed the missionaries in a good light and gave the royal court confidence in Western medicine.

As a consequence, Allen’s petition for the establishment of a hospital using Western medicine was quickly approved by the Korean government.

The hospital was opened on April 10, 1885, bearing the name Kwanghyewon. In the years to follow, missionary work didn’t limit itself to religion. It expanded into political, social, educational and cultural life as well.

Protestant private schools such as Yonhi and Ewha, which grew to become Yonsei University and Ewha Womans University, respectively, helped enhance nationalist thought among the public.

The Seoul Young Men’s Christian Association was founded in 1903 along with other such Christian organizations.

The organizations carried out sociopolitical programs, which pursued not only political and educational causes but also awakened social consciousness against superstitious practices, while promoting gender equality, elimination of the concubine system and simplifying ceremonial observances.

Today Christianity is probably the largest religion in the country after Buddhism. According to a 2005 government survey, 53.1 percent of Koreans adhere to a specific religious faith.

Since the early 1960s, when Korea’s Christians barely topped the 1 million mark, the number of Christians, particularly Protestants, has doubled every decade.

Korea has the second largest number of missionaries serving abroad, after the United States.