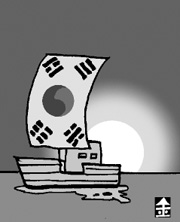 Bumil Safe and Sunil Safe in Paju,
Gyeonggi, are the world’s leading manufacturers of fireproof safes. They are equipped with state-of-the-art technology that allows the contents to safely withstand heat up to 1,100 degrees Celsius, or 2,012 degrees Fahrenheit, for more than one hour. The two companies are elated over recent successes, as export orders from America, Europe, Vietnam and Russia are pouring in, spurred in large part by the world’s current financial insecurity.

America was in a similar situation during the Panic of 1907 when banks collapsed after sudden withdrawals of money. Enter the financier J. P. Morgan, who invited six bank governors to his library one Sunday night, saying, “I need $20 million right now, otherwise we will be destined to end our terms as miserable failures.” These seven scraped together $25 million that night, and Morgan shouted in front of a bank the next morning, “Trust me and wait a while.”

The panic subsided a couple of weeks later.

In recent months, Korea has been harshly criticized by the international community. Didn’t they say that Korea is more likely to face national bankruptcy than the Philippines and Indonesia?

I’d say that worry can even be your lot in life.

Korea’s total imports of crude oil total $99 billion, on the assumption that the price of crude oil remains at $115 per barrel. If the price of Dubai crude stays the same, it will remain at around $60 per barrel. In addition, Korea’s trade and current account is projected to take a favorable turn next year, once $48 billion is returned.

Of course, Korea’s foreign currency reserves in October might fall by around $20 billion. However, there is no need to panic. A sharp decline in the euro-dollar exchange rate caused Korea’s euro assets to fall.

Fear felt by human beings is said to remain etched in the amygdala deep inside the human brain. Fear lasts longer than any other feeling.

We are hearing stories that staff at local securities houses have taken their own lives because of the sudden drop in stock prices and their fears that they will be very badly hurt by the financial crisis.

Goose daddies, men who work in Korea and remit money to their families overseas, have been deeply wounded by skyrocketing exchange rates.

But, remember, it is always darkest before dawn. We need someone like J. P. Morgan right now and we must not forget that we are the descendants of Admiral Yi Sun-shin, who fought on desperate seas.