Humanistic reminders of the purpose of life

Humanistic reminders of the purpose of life

The installation “Walking to the Sky”in front of Rockefeller Center in New York in 2004. Provided by the organizer

His works are never too hard to find.

Take Seoul, for example. When you walk past the Heungkuk Life Insurance building in Gwanghwamun, central Seoul, you cannot miss the big black “Hammering Man.”

The mechanical man moves his arms up and down, hammer in hand, gazing down at the busy passersby, a symbol of the solitude of modern-day workers, according to Borofsky. 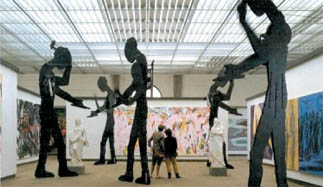 The installation “Five Hammering Men” at the Documenta in Kassel, Germany,

Hammering Man was first installed in 1979 at the Paula Cooper Gallery exhibition in New York. It was 11 feet tall and titled “Worker.”

Borofsky is once again in Korea for a solo exhibition, which opens tomorrow at the Pyo Gallery Seoul in Itaewon-dong, central Seoul.

As part of the exhibition, the artist yesterday installed “Walking to the Sky” in front of the Kiturami Boiler’s head office in Hwagok-dong, western Seoul.

The artwork is more than simply a tall stainless steel structure that stretches to the sky.

The solitary people walking skyward - all different ages, race and gender - are a challenging reminder to people to constantly think about who they are, what they are doing and to keep their dreams for the future, according to Pyo Gallery.

The indoor display at Pyo Gallery also includes works that touch upon humanism.

Borofsky’s latest collection of “Human Structures,” which was also exhibited in Beijing for three months before and after the Olympics, are a series of connected semi-transparent, life-sized human modules.

Compared to his previous gray-tone and monochromatic works, this series is brighter and cheery.

“It is a reminder that humans are dependent and that they are connected,” said Park So-min from Pyo Gallery.

Over 35 large-scale artworks by Borofsky have been installed in various parts of the world.

The aluminum “Molecule Man” stands on the Spree River in Berlin, Germany, and the colorful “People Tower” is at the Beijing Olympic Park in Beijing.