Cleaning up the zoos

Cleaning up the zoos 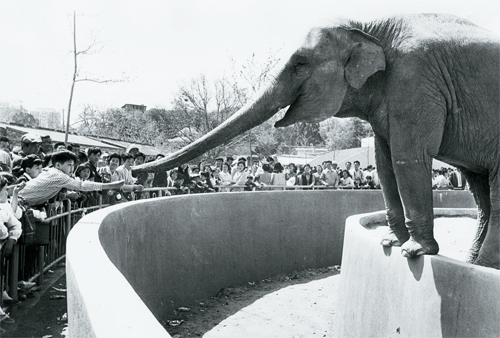 It was a slaughter of the innocent.

In the dying days of the Pacific War (1937-1945), Japan, desperate for manpower and weaponry, gave orders to kill the animals in a Korean zoo.

“The Japanese poisoned 150 animals during the [war], as they had to use the zookeepers as soldiers and the iron bars as weapons,” said Oh Chang-yeong, a former manager at the zoo in Seoul Grand Park, Seoul.

Oh describes the tragic massacre in “80-Year History of the Korean Zoo,” published by the Seoul city government in 1993.

The animals that survived the end of Japan’s colonial rule in 1945 would face more hardship. Shortly after the Korean War broke out, the zoo staff fled, leaving the animals to either starve or freeze to death. 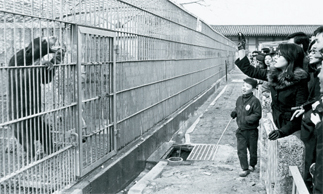 Visitors could not get close to the caged animals.[JoongAng Ilbo]

Whatever people might think about the quality of zoos in Korea today, things have obviously gotten a lot better.

Today marks the 99th anniversary since the first zoo opened in Korea. In 1907, Japan was busy extending its control over Korea and as a way of trying to diminish the authority of the Korean royal family, a zoo and a botanical garden were built in Changgyeong Palace, central Seoul.

The name of the palace was changed to Changgyeong Garden to add further ignominy.

The zoo opened to the public on Nov. 1, 1909, with a menagerie of animals including Siberian tigers, kangaroos, ostriches, camels and orangutans, and proved to be a huge hit.

Top: Ring-tailed lemurs at Everland live in a habitat similar to their natural environment, officials say. Above: Orangutans climb freely on a 19-meter tower. Provided by Everland

Although the zoo reopened after the Korean War ended in 1953, it wasn’t until the 1980s that the Korean government restored Changgyeong Palace and found the animals a new home.

Most Koreans who have been to the zoo in Korea - there are less than 20 - are familiar with “showcased animals,” or to be more exact, “caged animals,” but for many, memories of their trip probably include scenes of dull, inactive animals behind iron bars and people throwing stones or food at the cages.

A civic group called Haho, which is made up of members of the Korean Federation for Environmental Movement, a group dedicated to animal rights and welfare, inspected Seoul Grand Park in 2001 and published a report the following year.

“Sad Zoo” raised a red flag about the zoo’s facilities, arguing that they failed to consider the animals’ natural habitat and behavior. 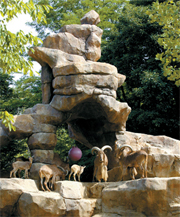 At the Seoul Grand Park, the rock-climbing Barbary sheep were given a rock mountain earlier this year.

According to the report, such an environment resulted in the animals’ failing health. They cited the case of a lowland gorilla, considered a critically endangered animal, who had to endure festering toes that scraped on the concrete floor of its living quarters.

Haho also pointed out how animals exhibit abnormal behavior due to stress, like a polar bear repeatedly shaking its head.

According to a survey in the report on reasons for visiting the zoo, only 10 percent of visitors said they came to see the animals, 36 percent said they came for a family outing and others said they were on a date or were just taking a break.

“Working here, what hurts me the most is the jail-like facilities of the zoo,” said Lee Won-hyo, the director of Seoul Grand Park.

But there have been several notable changes to the zoo in recent years. In March 2006, staff changed the soil on the grounds for the first time in its 22-year history, and in September of the same year, they planted 1,200 trees from the Namsan Botanical Garden, which closed in October 2006.

“We’ve begun to recognize the rights and welfare of zoo animals in recent years, and we’re transforming our facilities to ensure just that,” said Kang Hyung-uk, the chief of planning at the zoo, on a recent visit. 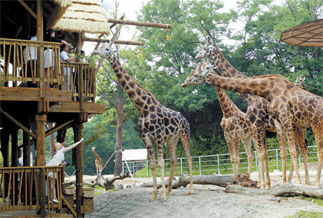 A twostory deck was built at the giraffe habitat to fit their height and habits.Provided by the park

“Before, the zoo was just about showcasing the animals. But today, we’re trying to change the place into an ‘ecology-oriented’ zoo by making their environment here as close as possible to [the animals’] original habitat.”

Other more recent changes include installing a mini rocky mountain for the Barbary sheep, rock-loving animals from North Africa who had to put up with a flat terrain for years in the zoo.

Last summer, a two-story observation deck opened at the giraffe habitat so giraffes no longer have to eat from the ground like before and visitors can feed the animals at eye level.

“We are in the process of changing the concrete floors to soil-covered ground and metal fences to wooden ones,” added Yun Jeong-sang, head of animal planning.

“We’ve also installed a heating system so the animals can stay warm in cold weather, and visitors can watch them in the winter unlike before.”

But staff at the zoo know they have a long way to go to realizing their dream of an ecology-oriented zoo.

“We have all kinds of animals here - some originally living in trees, some living on level ground, some living in caves. If we gave these animals all we’d like to give them, our work would be never-ending,” said Yun.

But they are heading in the right direction after years of apparent neglect.

“In the past, a zoo meant wild animals in cages, but that’s an outdated concept now,” said Kwon Su-wan, director of the zoo at Everland, an amusement park in Yongin, Gyeonggi.

“Although a zoo is a closed space, it is important to make the space similar to the natural habitat of the animals and watch how they behave. In that sense, a good zoo educates people about animals and their habits.”

Officials at Everland pick Monkey Valley as a prime illustration.

“Monkey Valley doesn’t have any bars on the cages. Some people may worry that the monkeys will run away. But we’ve studied their behavior and habits and designed it using natural barriers like water,” said Kim In-cheol, a manager at the zoo.

But animal rights activists point to issues other than changing the habitat. They argue that creating a better living environment is only half the problem.

“According to our recent survey, most of the zoos in Korea don’t even have in-house veterinarians. This is because there is no law concerning zoo management.”

International exposure is usually motivation enough to initiate improvements in most contexts, which is why next year should be a good year for the animals.

Next year, the Seoul Grand Park, the leading member of the Korean Association of Zoos and Aquariums, will host the annual conference of the Southeast Asian Zoos Association, a first for Kore. In an effort to live up to the expectations of its foreign counterparts, the Seoul Grand Park has launched a two-year project to reconstruct its ape habitat, long considered one of the most outdated facilities in the zoo.

Officials at the Seoul Grand Park hope that the enhanced facilities will increase Korea’s chance of one day hosting the annual conference of the World Association of Zoos and Aquariums, a focal point of the world zoo and aquarium community.

No doubt zoo animals here will be looking forward to that day, too.