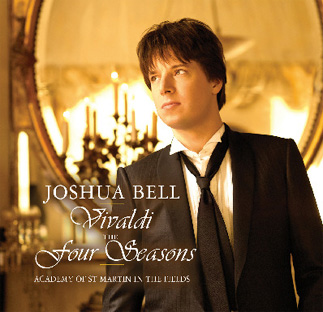 I first heard the resonant tones of Joshua Bell’s Stradivarius in the supplemental videos of a Washington Post Magazine article in which the violinist played in a busy D.C. Metro station to see whether commuters would notice.

I next encountered Bell’s virtuoso talent in the film “Ladies in Lavender,” in which he provides the rich, glorious soundtrack.

Bell is one of those rare classical musicians these days whose playing makes you sit up and take notice. “Vivaldi: The Four Seasons,” a recording he made with London’s Academy of St. Martin in the Fields, is a case in point. The concerto is one of the most overused pieces of classical music, but it sounds fresh and vibrant played with Bell’s bow.

But the standout piece on this disc is Giuseppe Tartini’s “Devil’s Trill Sonata,” which snaps you out of the familiar stupor that sets in during The Four Seasons. This final track is alternately as lovely as wedding music, then almost superhumanly energetic.