‘200-Pound Beauty’ takes to the stage

‘200-Pound Beauty’ takes to the stage 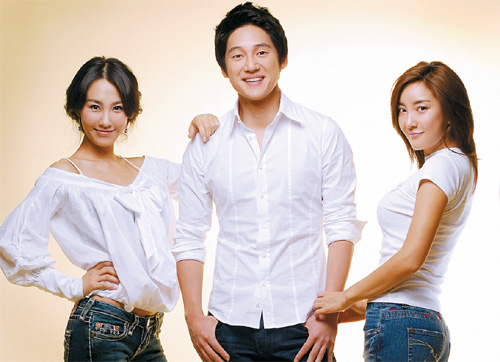 When the Korean entertainment industry saw a promising future of “movicals,” or musicals based on film scripts, several years back, musical production company Shownote bet on the award-winning film, “200-Pound Beauty” (2006).

The company thought that the film-based musical would also appeal to stage audiences with its orderly content and good music.

With three weeks to go until its opening, Shownote is hoping the 200-Pound Beauty musical will draw as large an audience as the film did. The romantic comedy attracted 6.62 million viewers nationwide.

Though the characters’ names are different, the musical’s story line remains the same as the film. 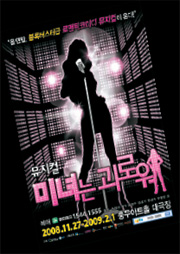 Han-byul (played by Choi Sung-hee and Yoon Gong-joo) is an overweight woman - 275 pounds and 5.5 feet tall - who wishes to be loved.

Her only gift from God, she believes, is her voice, so she dreams of becoming a singer. But since she doesn’t have a perfect figure and wants to appear on stage, she has no choice but to become a faceless singer. She dubs her voice to be used by someone prettier.

While singing backstage, Han-byul falls in love with Sang-jun (Song Chang-ui), her music producer, who approves of her musical talent. It isn’t easy to win his love, though, because she feels she is too big.

To gain confidence, she undergoes major plastic surgery, appears on stage, reaches stardom and charms Sang-jun in the process.

“Though not as heavy as Han-byul, I used to wear a size 6 when I debuted on stage in 1997,” said singer Choi, one of the actresses double cast for Han-byul, during a press conference at the Hard Rock Cafe in Itaewon, central Seoul, on Monday. Choi was the lead singer of the girl band S.E.S.

“The other two members wore sizes 4 and 5, which made me feel left out. I had few choices about what to wear,” she said, adding that to cover her larger figure, she practiced singing and dancing every day for six years. She wanted her talent to be approved by the public.

Having gone through that experience, it was easier for Choi to absorb her character’s feelings.

“Every actor’s personal ego is immanent in a character,” she said.

This is what distinguishes the musical from the film. Each character is played by a different actor who has different emotions.

“It is true I had a sense of rivalry towards Choi [since we act the same roles],” Yoon said. “But I’ve figured every acting stage is different, which makes musicals charming.”

Perhaps this is what lured Song back to a musical after almost three years acting on screen. Recently, he filmed “Once Upon a Time in Seoul,” a movie being released tomorrow about the period after the Korean War.

The musical’s climax is by far when the overweight Han-byul emerges pretty and slender.

How can that be possible on stage, though?

“It’s magic,” said stage director Kim Dong-hyuk. “She transforms into a gorgeous woman in the time phase of one musical song. You’ll just have to come and see.”

In fact, the costume and special makeup teams brainstormed to figure out the best and fastest way to stage the makeover. The production company has refused to reveal the secret so far.

“Some may ask why watch the musical if they already know the story?” said chief producer Lim Yang-hyuk. “It’s like ‘Les Miserables.’ Everyone knows the story but still, they go and watch. Every stage is very independent. It’s live.”

Meanwhile, Shownote is planning to also showcase the musical in China, Singapore and Hong Kong.