[TALK OF THE TOWN]Pioneer diva - a dream deferred

[TALK OF THE TOWN]Pioneer diva - a dream deferred 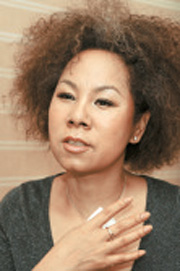 When pop singer Kim In-soon made her debut 30 years ago, she faced racial discrimination - She had a black American father and a Korean mother.

After years of effort, however, she became a Korean diva.

But the singer, 51, is again in a hard place. Her wish to perform at the Opera Theatre in Seoul Arts Center has been rejected - twice; once in April and again in October.

Seoul Arts Center notified Kim that she did not meet the criteria to perform on the big stage.

“I’ve handed in a performance outline to the Seoul Arts Center according to the auditorium regulations but I was left out for no reason,” Kim said, at a press conference at the Sejong Center for the Performing Arts on Monday.

She said that while she is one of the few singers who has performed at Carnegie Hall in New York, she does not understand why she is being rejected in her home country.

Despite Kim’s remarks, Seoul Arts Center stands firm on its decision. The the center was established in 1987 to promote classical music, so staging a pop concert would not match its original purpose.

In fact, the Ministry of Culture, Sports and Tourism officially designated Seoul Arts Center as a special performing center for classical music and ballet in September.

Meanwhile, Kim released her 30-year debut anniversary album, “Legend,” early this year and has been touring around the nation.