A sticking point for Han medicine

A sticking point for Han medicine 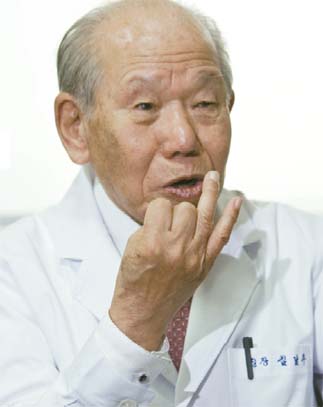 Kim Nam-soo, 93, is one of the few remaining licensed acupuncturists left in Korea. Although he has been practising acupuncture and moxibustion since 1943, Kim has recently been suspended by the Korean Han Medical Practitioners Association as his acupuncture license does not extend to moxibustion.[JoongAng Ilbo]

It’s not often you see over 3,000 people voluntarily lining up to be poked by needles.

But that’s exactly what the crowd was waiting for at the Dongdaemun Sports Complex last month. From grandfathers to young men in their 20s, people from as far as Jeju Island had been waiting since early morning for some traditional acupuncture treatment.

The organization was founded by Kim Nam-soo, 93, one of the few remaining licensed acupuncturists left in Korea.

But there’s a dispute brewing between the traditional Korean medical establishment and Kim Nam-soo and his supporters.

The Korean Han Medical Practitioners Association argues that Kim is only allowed to practice acupuncture since his license does not extend to moxibustion treatment.

He was sued by the association and suspended from Oct. 1 to Nov. 15. In protest against the move, Kim’s supporters staged a rally in front of Seoul City Hall earlier this month. They then decided to hold the event at the sports complex as well to express their anger, as spots were marked on the patients’ bodies but no moxibustion was given.

Kim’s argument is that he has practiced acupuncture and moxibustion treatment since opening his own practice in 1943.

“If you ask for a license there won’t be many people who can practice the art,” said Kim, who has passed down his knowledge through a one-year course to about 4,000 students.

“This is the first time that I have ever been suspended.”

Patients can either be treated with acupuncture only, or a combination of acupuncture and moxibustion.

Medical reforms enacted in 1962 under the rule of President Park Chung Hee abolished a law that licensed acupuncture and moxibustion separately from other forms of oriental medicine.

After the reform, acupuncture and moxibustion were legally only practiced by those who had obtained separate licenses for each treatment before 1962.

The 11 acupuncture and moxibustion institutes run by the government were closed down and anyone aspiring to become an expert in oriental medicine, or “Han doctor,” had to go to colleges that offered the relevant courses.

As a result, apart from Han doctors, the remaining licensed acupuncturists - of whom there are less than 50 - here are all over 70 years old, having received their credentials before 1962. 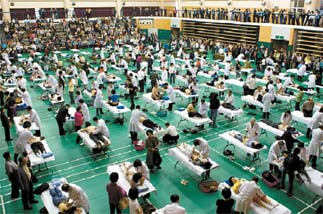 Over 3,000 people went to the Dongdaemun Sports Complex last month for some traditional acupuncture.[JoongAng Ilbo]

The association argues that anyone without the correct licenses should not be allowed to practice.

“If you allow quasi medical activities, at the end of the day it will be the patients who will be harmed,” said Lee Sang-bong, an official with the association.

“Proper education is needed. You can’t just churn out doctors like a product from a factory.” 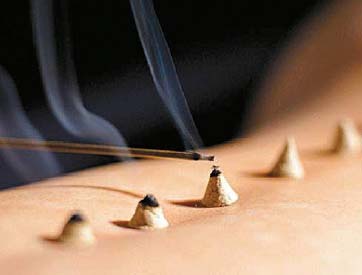 Kang Jae-man, president of the Association of Korean Oriental Medicine, says that only people with his qualifications and training should be allowed to practice.

“When I went to an oriental medicine college in the ’70s, I learned acupuncture and moxibustion both in theory and practice,” he said. “That’s how it should be.”

Some experts say that making a clear distinction between the different fields of oriental medicine is not that easy.

“The sole license for acupuncture was abolished after 1962 but there was never really a regulation put in place that clearly said that moxibustion is the territory of Han doctors,” said Lee Yun-tae, a researcher at the Korea Health Industry Development Institute, a government agency which recently conducted a study on alternative medicine in Korea and other countries.

Chun Sae-il, who heads the graduate school of alternative medicine at the College of Medicine at Pochon CHA University, thinks that acupuncture and moxibustion are interlinked and cannot be separated.

Thus it’s natural that Kim Nam-soo is practicing both at the same time. “It’s a connected medical activity,” said Chun.

For authorities, the issue is sensitive enough to take a wait-and-see approach.

“To let unqualified people practice illegally is not acceptable. This has to be regulated,” said Jeon Byeong-wan, a health ministry official.

“But it’s a dilemma. I am not sure we should strictly look at the legal aspects when we are talking about people who offer to help others.”

The Health Ministry has asked the institute to conduct a study on how to regulate acupuncture and moxibustion practiced by people who have not learned their trade from established institutes.

Some lawmakers argue that the matter has been overly complicated. They say that moxibustion does not require much skill or knowledge and therefore should be allowed without regulation.

“To regulate moxibustion, which is a very easy way to maintain one’s health, is being out of touch with reality,” said Democratic Party lawmaker Kim Chun-jin.

The lawmaker said he is preparing a bill for submission to the National Assembly calling for the deregulation of moxibustion treatment.

The Constitutional Court ruled in 2005 against the practice of moxibustion by anyone other than Han doctors.

Certainly, for some prominent people the lack of a license didn’t really seem to matter.

According to Kim Nam-soo, former President Kim Young-sam called him in to treat a leg injury sustained while jogging. The president nicknamed him the “one-shot acupuncturist,” because his pain would go away instantly after treatment.

Still, for Kim, not being able to practice his trade is causing him great despair.

“I should be thankful to the Han doctors as I can take a rest from all the people that were lining up to see me,” said Kim sarcastically.

“If I am not able to do what I have been doing for so long, I should leave this country.”

Kim has 26 clinics around the country, including at the National Assembly complex, where he and his students have been providing free moxibustion treatment.

Acupuncture is legal in China and North Korea, as well as in the United States where, depending on the state, different rules apply regarding licensing. European governments, including France, England and Austria, also allow its use by doctors.

Acupuncture is a technique based on the idea that the body can heal itself naturally when certain key areas on the body are stimulated. There are 12 spots that are considered pathways for the body’s energy.