Farmers go on the market

Farmers go on the market 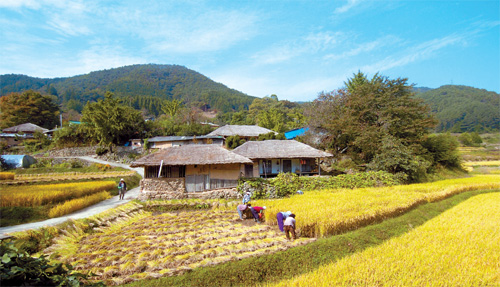 It’s not often that a 26-year-old drives a luxury sedan and earns the equivalent of managers at large corporations.

But Song Ki-hyun is not your typical college grad.

A graduate of the Korea National Agricultural College’s Department of Livestock, Song, now a hanwoo cattle farmer, makes more than the average manager at major corporations in Korea. Hanwoo is Korean beef cattle.

Located a mere 15 minutes from Suwon Station, Gyeonggi, in what one would hardly consider the countryside, Song’s ranch is nestled in the middle of a very average-looking farming community with peppers, cabbages and tomatoes being grown in vinyl shelters.

However, while waiting for Song to arrive, a peek past the open front gates revealed a sizeable herd of 150 hanwoo cows and a Hyundai Grandeur parked in the garage.

Song said he had recently switched from an Equus, which was too big for him. With mannerisms and a maturity well beyond his years, Song went on to explain.

“I’m a man with a lot of pride. I hate to lose. A girlfriend I had back in senior year in high school dumped me for a college student with a fancy car. That drove me and is partly responsible for my fascination with cars,” said Song.

He also confessed that although he had helped his father on the family cattle farm since the age of 14 and went to an agricultural high school, he was more of a troublemaker who hung with the wrong crowd in his youth.

“I would never prepare for classes and often came home after lunch. I was not an academic type, but I knew the beef cattle business from years of working on the farm and I honestly worked my tail off to succeed,” added Song.

Ever a competitive soul, Song noticed that some of his KNAC peers came from farming families with up to 300 cattle. He felt he had some catching up to do, so he worked hard in school and even harder upon graduation.

Over a bowl of eojuk, a fish stew that is a specialty of Suwon, Song said he had been out at a cattle market and auction all night and had even more farm work to complete after the meal.

“I never have a day off. I work 365 days a year and when I’m not busy tending to my cattle, I often help my neighbors with their field work during peak seasons.

“Although I may get physically exhausted, I have never felt psychologically drained,” said Song. 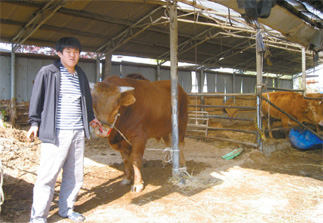 Song Ki-hyun with his prized bull, Biho. By Jason Kim

Spoken like a true farmer with his tough exterior, calloused hands and honest, straightforward speech.

But Song wasn’t successful from day one.

He sought assistance through a government fund and with the money purchased 30 female calves and three fighting bulls, Biho, Victory and Yongari.

After racking up some impressive wins, Song sold Victory and Yongari and bought 80 more calves and cattle.

That was the turning point and although he admits business is down from last year, he is still making an impressive profit. 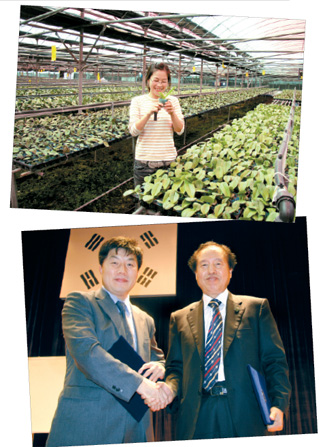 “I’m not perfect but I make enough to provide a very comfortable life for my potential spouse,” said Song somewhat reluctantly, after initially saying he was too busy with work to worry about marriage at this point.

The stereotypical image of poorly educated and uncultured farmers with low incomes does not apply to Song and his peers.

At a time when the average age of farmers is rising, KNAC, a fully government-funded, three-year college located in the city of Hwaseong, Gyeonggi, is producing young educated “agricultural entrepreneurs” to buck the trend of aging in rural areas.

According to a survey by the Rural Development Administration, 42 percent of the rural population is aged over 60.

The average age of farmers in Korea has been steadily rising over the years as more youths venture to Seoul or other sizeable regional cities in search of a cosmopolitan lifestyle.

The rural environment, farmers’ lower income and the hard physical labor has made it an unattractive place for women.

According to a survey by the
Gyeongbuk Women’s Policy Development Institute, 41 percent of marriages involving local farmers in 2006 were international.

But look out, ladies, because farming has a new face.

KNAC had recently released statistics on the average income of its graduates.

Lim Dong-hoon of KNAC says 95.3 percent of their graduates are in the agricultural industry and their average annual income is 67.8 million won ($53,682). This is nearly double what average farmers make in a year.

“I would have to say the figure is closer to 78.5 million won this year. It’s been steadily increasing over the past three years,” said Lim.

KNAC graduate breeders are said to earn an average of over 100 million won per annum.

Which is why KNAC has struck a deal with Sunoo to try and find these young “agricultural entrepreneurs” spouses. The agreement was announced on Sept. 10.

KNAC has agreed to pay the membership fees of graduates who are interested in signing up for Sunoo matchmaking events and promotions.

“KNAC grads earn almost as much as mid-level managers at major corporations in Seoul. So this should attract some interest from females,” said Jung.

Sunoo and KNAC are hoping such impressive figures will pique the interest of city-dwelling ladies who would otherwise be reluctant to relocate to the countryside.

“We have held many events in the past wherein we tried to introduce potential mates to single farmers. To be honest, the events did poorly as few women showed an interest in marriage and relocating from the urban lifestyle,” added Jung.

Sunoo is currently in the process of uploading the profiles of four KNAC graduates to be featured in the “Special” section of their Web site.

“We’re taking a different approach compared to the past and hope the marketability of KNAC graduates can hopefully garner some serious interest,” said Jung.

KNAC has 780 current students and 1,840 graduates to date. Since the government covers everything from tuition fees to textbooks and boarding, the graduates are required to farm for at least six years upon graduation.

Most of the students who enroll at the college come from the rural area and have parents who own farmland.

“Of course, there are other criteria but being in a situation to apply the knowledge learned in school immediately upon graduation is of importance,” said Lim.

Although there are students who apply to KNAC after graduating from high school, Lim said approximately 15 percent of new students are university graduates whose parents want someone to continue the family business.

While the three-year program, which includes overseas training as well classroom and practical in-field education, is said to provide KNAC graduates with the tools to succeed as farmers, women still have biased opinions about life in rural areas, Lim said.

“When people think of farming, they often think of long hours of physical labor away from modern amenities such as shopping malls and cultural activities, and of peasants with low-quality education.”

This, he says, is an outdated notion.

“Women will have to lend a hand around the farm but they are not responsible for any strenuous labor and given that transportation is what it is today, it gives easy access to major cities around the country,” added Lim.

“Farming is no longer done the way it was done in the olden days. A lot of the hard work has been eliminated by machine use.”

Moving to a rural area is a good option for women who don’t mind the quiet lifestyle, he says.

“If they can adapt to life in the countryside, they can lead comfortable lives, perhaps even better than what they think,” said Kim.

Having said that, KNAC’s claims of the average income of its graduates is a matter of debate for those with farming experience.

“The figure stated by KNAC is impossible to produce unless the farmer has a sizeable plot of land and help around the farm. I’ve been farming for many years, and from my point of view, those figures are only possible for the select few,” said Kim.

Kim Teuk-hwan, 27, who graduated from KNAC, in 2003 has been working on the family farm in Younggi, North Gyeongsang since he graduated and added his personal experience to the mix.

“Those who study and work hard during their stay at KNAC and then who are able to implement their education and infrastructure can maybe produce those types of income figures.”

But graduates, Kim included, often have conflicts with their parents, he said.

“Most farmers have been farming a certain way for decades and they are not open to changes. It’s sometimes better to conform to their way then to try and convince them,” said Kim.

Kim added that since he’s busy with farm work, he doesn’t have much time to think about marriage.

“Rural areas provide a comfortable and nice environment. Furthermore, Seoul and Busan are merely hours away. I make trips up to Seoul on weekends several times a month,” added Kim.