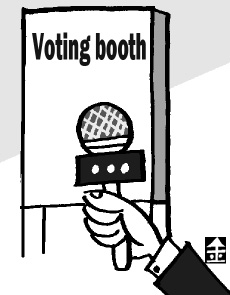 Exit polls are sometimes referred to as the “flower” of political surveys. They remain the most accurate method of predicting election results, because the surveyors directly question the voters exiting from a voting booth. The danger, however, is if these poll results are announced too early, it can affect voting behavior.

In the 1980 U.S. presidential election, broadcaster NBC announced at 8:15 p.m. Eastern time, that the exit polls indicated a Ronald Reagan victory. The problem was that on the West Coast, where it was only 5:15 p.m., there were still three hours left for voting. Jimmy Carter exacerbated the situation by making a premature concession speech a little after the NBC report. As a consequence, experts believe the voting rate in the state of California dropped by 2 percent, although the voting also showed a tendency to follow the trend for Reagan in the East.

In the 2000 U.S. presidential election, major broadcasters were left humiliated by Florida, the state where a tight battle was ensuing. At first, they announced that Al Gore had won the state, then retracted and said George W. Bush had won, before retracting again and pronouncing “the winner is still not clear.”

In the 2004 presidential election, the reliability and security of exit polls themselves were damaged. Polls showing that John Kerry was ahead by 3 percent were leaked over the Internet from 1 p.m. on election day. However, ballot counting results confirmed that George W. Bush had won by 3 percent. The company undertaking the exit polls later announced in a report that they assumed there were more Kerry supporters than Bush supporters who responded to their survey.

During the 2006 midterm elections, support of the Democratic Party was overstated in the exit polls. Broadcaster Fox News subsequently declared that it would no longer quote exit polls to predict the result on the night of the election.

Exit polls at this year’s presidential election will be conducted by interviewing 10,000 voters in more than 1,300 sample voting booths. Many experts believe that this time around also, the projected support rate for the Democratic Party will be higher than the final count.

The five U.S. broadcasters in the survey consortium and The Associated Press plan to keep the results under wraps until 5 p.m. Eastern time (Wednesday, 7 a.m. in Korea).

CBS claims that by 8 p.m. it will be possible to determine the winner. But NBC has stated that it will place more emphasis on accuracy rather than speed.

Let us see who calls the true winner.