One calligrapher’s take on emotion

One calligrapher’s take on emotion 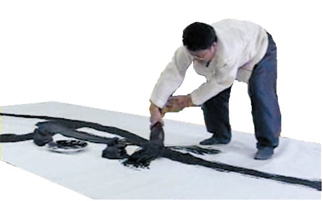 What do you get when you mix calligraphy and art?

“Emography,” according to artist Huh Hwe-tae, or a combination of “emotion” and “calligraphy.” Emography is also the title of Huh’s new solo exhibition.

“Emography refers to a modern interpretation and expression of traditional painting and calligraphy. Some believe it is playing a role in including calligraphy as a genre in the field of modern art,” said Kim Yeo-jin, one of the organizers of the exhibition.

“Huh’s large-scale works, which often include sweeping brushstrokes from a brush the size of a man’s arm, are also looked upon with curiosity and interest by many,” 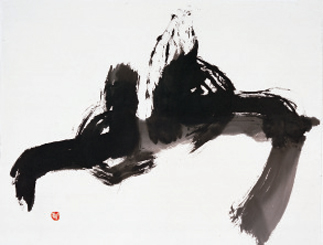 Huh’s distinctive style and unique ability to blend tradition and modern elements are welcomed by many in the art world.

“Emography is not merely a word expressing a notion but has traces of sensitivity. Huh’s use of the brush is bold yet simple and naive,” said Ryu Byung-hak, a local art critic.

Huh is both an artist and a serious calligrapher with over 47 years of experience in traditional calligraphy.

He began practicing calligraphy at the age of 5, and first gained recognition during his teenage years.

Ryu said there aren’t any comparisons to Huh’s work either in Asia or in the West.

“The big three Western artists who were influenced by Asian calligraphy and philosophy in their work are Mark Tobey, Adolf Gottlieb and Franz Kline. But there is a clear difference between their work and Huh’s.

“That’s because none of the Western artists were serious practitioners of calligraphy,” added Ryu.

Huh has 308 works on display at the current exhibition - including paintings, calligraphy, ceramics and furniture, all of which include emography,

Kim says that the traditional elements of Huh’s works have been well-received abroad, and include a successful exhibition in Berlin in 2006.

An exhibition is also planned for Virginia, the United States, in 2010.

The center is located near Nambu Bus Terminal Station, line No. 3, exit 5.