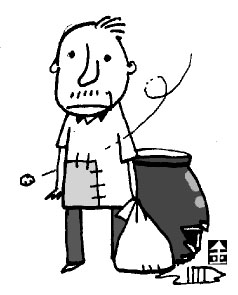 Poverty is destitution, known as bingung in Korean. However, the two are slightly different. Bin means dispersal of wealth and is composed of the Chinese character pae (money), placed below bun (dividing).

On the other hand, gung is composed of hyeol (a small hole) with a character that means “body” and refers to extreme poverty.

According to the dictionary, “bin” means “not possessing wealth” and “gung” means “having no way out.”

If we combine the two, it means not having anything to eat and live on so that one can’t go any further.

Such poverty is very dangerous to people.

One is desperate, because there is nothing to eat or live on and brings grief. Efforts taken to relieve poverty may be at the root of all human behavior since the beginning of history.

Therefore, efforts to fight poverty have always been made.

What shall we do if poverty lingers on even when we try to chase it away?

Poverty refutes him in the prose, “Having attended the king [during difficult times] and endured in humble homes ... you have gained great virtue [thanks to poverty] and yet you only resent me.”

Yang Xion then realizes that his literary fame is the result of having overcome destitution in the past.

Linking “contentment with poverty and delight in Taoism” emanates from this.

The oft-heard maxim “The more destitute we are, the firmer our integrity becomes,” is born from the positive thinking that sees today’s poverty and destitution as the ground for a good tomorrow.

Making ends meet in each household is becoming much more difficult nowadays. Even if we try to chase destitution away, it sticks to us.

We must think of the present as an opportune time to make efforts to prepare for a hopeful tomorrow.