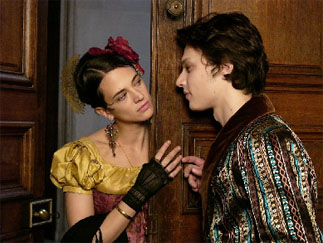 It was hard to watch “The Last Mistress” from start to finish. Perhaps it’s because I’ve never experienced such cruel love. Nonetheless, the love and hatred between the two protagonists seems crazy, even abnormal at first.

Based on the novel “Une Vielle Maitresse” by Jules Barbey d’Aurevilly, it was written and directed by Catherine Breillat, who also directed the controversial “Fat Girl.”

The film is set in Paris in 1835, and keeps shifting to the past in flashback scenes. Much of the plot is told from the perspective of young nobleman Ryno de Marigny (Fu’ad Ait Aattou).

It wasn’t clear whether Marigny loves Hermangarde or her money. However, he obviously wants to settle down.

With a few days to go before the wedding, he comes clean about his relationship with Vellini to Hermangarde’s grandmother. She’s very open-minded, even sympathizing with him. I guess even the old lady isn’t immune to his good looks.

In contrast to the blue-blooded Marigny, Vellini is a wild, untamed femme fatale of low birth: It is said she was the illegitimate child of an Italian princess and a Spanish bullfighter.

Her presence itself is alien in French upper-crust circles. We can tell she’s Spanish from her curly black hair.

Every detail, from the red flower in her hair, her big earrings, her bright dresses and her seductive purr point to her exotic roots.

This explosive combination doesn’t last long. After losing their baby daughter in Algeria, the lovers find themselves unable to stay together and move on to other affairs. But they keep reconciling in bed, drawn back to each other over 10 years.

Marigny has every intention of ending his affair with Vellini by marrying the heiress. He settles down in a distant castle by the sea in the south of France so that he can avoid the temptations of Paris - Vellini.

However, when she reappears in front of him, he just can’t resist her.

Marigny likens himself to a horse in battle, charging repeatedly into the fray from a “mysterious attraction to pain.”

Marigny and Vellini can’t be free from each other, even if they strongly believe they no longer love each other. So how do we define their relationship, if it is not love?

Perhaps it depends on you whether you call it an all-consuming, insatiable desire or love based on strong hatred.