Bond is back: blond hair, blue eyes and all

Bond is back: blond hair, blue eyes and all 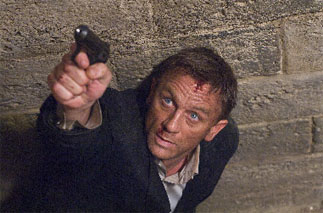 The James Bond franchise is hard to get wrong. All you need is your suave British cad, your gorgeous Bond girl, some fantastic gizmos and the magnificent Judi Dench.

And while 2006’s “Casino Royale” took some getting used to when Bond went blond, the audience is now fully prepared for Daniel Craig in the driver’s seat, which is exactly where we first find him.

This globe-trotting adventure begins in Italy, with Bond embroiled in a high-speed car chase. We learn he’s detained an agent with clues on a mysterious organization threatening MI6, 007’s mother ship, and from here it gets personal.

When we last left Bond, he was a damaged soul after the death and betrayal of his lover Vesper Lynd. In “Quantum of Solace,” he is single-minded in his pursuit of Lynd’s other boyfriend, Yusef. So when the new organization takes a crack at M (Judi Dench), Bond’s spymaster, the agent adds a new line to his to-do list.

What follows is fast-paced jetting from Italy to Haiti, then Austria and South America and so on. Along the way, Bond finds his target, the sniveling villain Dominic Greene (Mathieu Amalric), who is masquerading as an environmentalist-philanthropist.

Greene has been buying up land ostensibly for conservation purposes, but is in fact abetting political tricksters and price gouging for utilities. Amalric is a great visual foil to Craig. While our agent steals a string of somehow perfectly tailored ensembles, the rodent-like Greene mostly swathes himself in cruise ship classics.

Another addition to Quantum of Solace’s complicated cast of characters is Camille (Olga Kurylenko), Greene’s former lover. As he says, both she and Bond are “damaged goods” in pursuit of revenge. It’s a bit silly that director Marc Forster thought he could slather the Ukrainian actress in self-tanner and pass her off as Bolivian, but the bronzed beauty plays her part well. At the end of the film, I’d say she’s a refreshing change from other Bond girls.

Like the other entries in its franchise, Quantum of Solace is slick and stylish. All of the details are right, from the cut of Bond’s remarkably durable and elastic suits to the large marquees that mark each change of location.

The high-tech gadgets, like an interactive digital table, are as tickling as ever. Quantum of Solace is sharp, too, in its incorporation of current events. The film takes jabs at American-backed dictatorships, environment-mania and the evils of Big Oil. The messages aren’t especially deep, but they keep things interesting in a speedy, satisfying sidewinder of a plot.

Daniel Craig proves once again that he truly can embody James Bond, blond hair, blue eyes and all, and he’s certainly adept in pulling off convincing hand-to-hand combat. He’s doing for 007 what Christian Bale has done for Batman - he’s a fresh face for a familiar role.

But if it’s familiarity you want, then there’s Judi Dench as M. I have no idea how she’s still got it at 73, but she’s delightfully brisk and brittle in her role. But M’s not all business; Bond refers to her as something of a mother. She’s got faith in our hero, and in Quantum of Solace, we couldn’t agree more.