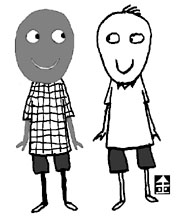 In the 16th century, when black people from Africa were being sold as slaves, some Europeans believed that skin color could be changed depending on how much sunlight a person receives.

They assumed that if a black person leaves Africa and moves to those areas where the sun would have a less powerful effect, he might end up becoming yellow. However, after Columbus discovered the New World, this hunch turned out to be wrong. It was found that indigenous peoples in North America were olive-skinned, despite a climate similar to Europe. The skin color of black people from Africa who ended up in Europe and the New World has not become light at all.

Science explains that skin color depends principally on the following three elements: melanin, hemoglobin and carotene. Among them, carotene has a temporary effect on skin color. Excessive consumption of foods high in carotene, such as carrots and tangerines, may turn one’s skin yellow for a short time.

If hemoglobin is abundant on the surface of the skin, it may appear reddish.

But the important factor in determining race and skin color is the amount of the dark brown pigment melanin in the skin. The number of melanin cells is not determined by race, but by the density of centrioles in a melanin cell.

The theory that skin color adapts to the level of ultraviolet radiation makes some sense. The ancestors of modern humans who lived predominantly near the equator in Africa had darker skin because it was more effective at reflecting heat, helping the body cool down and preventing the skin from receiving harmful ultraviolet rays. When receiving the same amount of sunlight, white people are 10 times more likely to develop skin cancer than black people.

However, less exposure to ultraviolet rays can lead to a deficiency in vitamin D, also known as the “sunshine vitamin.” This is the main reason why black people are at higher risk of contracting rickets, rheumatoid arthritis, cardiovascular diseases and colon, lung and prostate cancer, due to vitamin D deficiency.

After migrating from Africa and settling into areas of Asia and Europe, these humans may have needed to receive more vitamin D, thus their skin became yellow or white in order to survive.

An exception to this theory are the original inhabitants of Alaska who had black skin, despite living in a polar area, which has scarce sunlight. Experts explained that their diet of fish high in vitamin D removed the need for their skin tone to lighten.

Dark skin has long been associated with discrimination in history. However, this wall is finally collapsing due to the huge contributions of African-American figures such as Martin Luther King, Michael Jordan, Oprah Winfrey, Morgan Freeman, Colin Powell and Condoleezza Rice.

At last, Barack Obama is poised to lead the United States as its first black president. We look forward to his leadership and future contributions.