A splash of color, a dash of hope

A splash of color, a dash of hope 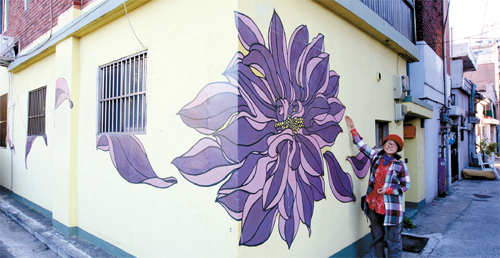 Park Seon-hee, an artist with Rira Republic, a public art group, shows one of her works in Mangwon, Mapo district. [JoongAng Ilbo]

Sitting just north of the Han River, Mangwon, in Mapo district, often found itself under water whenever it rained.

“Either because of that or the lack of development, Mangwon has more rundown structures than other neighborhoods like Hapjeong or Sangam,” said Lee Su-byeong, a Mangwon representative.

The situation improved in the 1990s after investment was made in flood infrastructure, but the area’s rundown image stuck.

But this is exactly what attracted Rira Republic, a public art project group comprising five artists, to Mangwon. 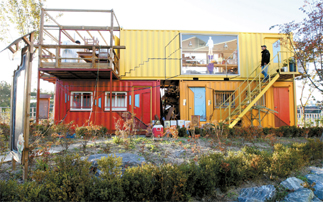 The work room for the artists and the residents lights up the area’s bleak, run-down alleys with bright colors and paintings. [JoongAng Ilbo]

Since last year, the group has been transforming parts of Mangwon that had been ugly and filthy into creative, eye-catching works of art.

The group was formed in 2005. Their mission is to work with local residents to give old, neglected streets a makeover. Dubbed the Street Artists’ Project, the initiative is financed by the Seoul city government as part of efforts to make the capital attractive and arty.

Neighborhoods that have been given facelifts by Rira Republic so far include Seoksu Market in Anyang, Haemang in Gunsan and Seongsan in Mapo.

Ha Yeong-ho, one of the artists, says that Mangwon is “exceptional from a cultural aspect.” Although it doesn’t have as much cultural infrastructure as other areas like Sangam, Seongsan and Seogyo, it has one of the district’s few remaining traditional markets, Ha said.

“But our survey found that the majority of residents here plan to move once they can afford a better place,” he added.

Mangwon, in that sense, is an outcast in the heart of Seoul. It’s a site that massive city development has orphaned, and a place that its residents would rather not call a permanent home.

But Rira Republic’s efforts are getting noticed. Here and there a sprinkling of color and design is lighting up pockets among the clusters of bleak and dilapidated structures.

A case in point is the voluntary patrol officers’ post, which stands out even at a glance. It’s actually a shipping container measuring some 7 to 8 meters (23 feet to 26 feet) in length, covered with a dreamlike painting of a Greek temple.

It gives you the illusion of looking up at the temple from the ground, which makes you think that you’re in a wide open space instead of a deep blind alley.

But the mural was not the work of a veteran painter - it was done by the Rira Republic artists and the patrol officers.

Rira Republic first made a rough sketch, after which the artists and patrol officers together painted the picture. The work was completed this summer.

Team efforts like this are the focus of this whole endeavor and also what differentiates this renewal project from other similar ones.

About 200 meters from the patrol post stands a modest two-story house. The walls of its first floor feature a large lavender flower against an ivory background, its vivid colors and smooth curves cheering up this dull corner of the neighborhood.

“My housemate doesn’t have children, so I thought a drawing would light up our house and the mood in it,” said Lee Jae-gil, 37, who lives in the building. The Rira Republic artists drew an initial design, which Lee and his housemate reviewed and suggested changes to. When everyone was happy, the work went ahead.

Since August this year, the artists have been focusing on one of the most problematic streets in Mangwon, unit 5-5.

It is crammed with residents aged between 50 and 70, most of them jobless. The low-lying area is also often heaped with trash.

Rira Republic has recently cleared the trash away and created a small garden, putting in a hedge and planting cabbages.

Around a dozen buildings and sites have been given a new lease of life in this way. As Ha Yeong-ho explains, the essence of their work is in the breaking of the traditional one-way, hierarchical dynamics of art.

“Public art is about bringing artworks out of exhibition halls to a public space. But our definition of public art is shifting from the conventional process whereby artists create a piece and showcase it to the public, to one in which artists and the public work together to create art,” Ha said.

The project wasn’t without its share of struggles and conflicts.

“The people here are used to receiving charity and pro bono work, so some of them didn’t really care about the project, thinking of it as the usual free maintenance work or something similar,” said Park Seon-hee, Rira Republic’s art director.

“But since our work is all about collaborating with the people, this indifference was a major barrier. For these people, making ends meet has been their sole priority, so inducing participation from them wasn’t easy.”

Rira Republic will wrap up its work in Mangwon this December. They will continue to hold classes, though, taking people to areas needing renovation and teach them some on-the-spot basics in woodworking.

As to what the Street Artists’ Project will do next, it’s still anyone’s guess.

“A series of street renewal projects have sprung up in recent years, but their sustainability is in question,” said Park. “We’ll take some time to deliberate ways to make our project more long-lasting and people-friendly.”