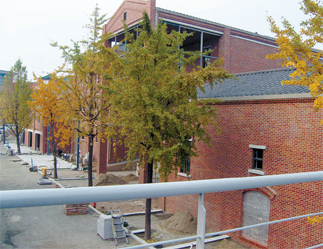 The restored buildings will be used for exhibition halls, artists’ studios, concert halls and lodging facilities. Provided by the Incheon city government

Several old structures built around Incheon port on Korea’s east coast between the 19th and the mid -20th century will be reborn as art museums and galleries.

The Incheon city government is in the final stages of renovating 13 dilapidated buildings in Haean, Junggu, central Incheon. It hopes to create a major arts complex named the Incheon Art Platform.

The structures include the former Nippon Yusen Kaisha office building, built by a Japan-based shipping company in 1886; a Korea Express warehouse (1948), Samwu Printing House (1942) and the Daijin Trading Company building (1948). While six of the buildings have been restored to their original shapes, the rest have undergone major reconstruction, as they were considered unsafe after a structural inspection.

“The area plays an important role in Korea’s modern history as it’s where Korea first opened its ports to foreign countries,” said Hwang Ui-sik, chief of the culture and tourism department at Incheon city government.

A collection of old buildings in Incheon are being renovated into a major arts complex, the Incheon Art Platform.[JoongAng Ilbo]

“By preserving and restoring the buildings, we believe we can attract tourists, and secure a site for creative and cultural activities.”

The Incheon city government has injected about 11 billion won ($ 8.7 million) into the project. It plans to build exhibition halls, artists’ studios, concert halls, accommodations and other facilities. The lodging facilities will mainly host local and international art and literature critics and experts.

The Nippon Yusen Kaisha building will function as a promotion and information hall for the envisioned art village.

“We hope that by hosting various international programs, the Incheon Art Platform will also serve as a major venue for global exchanges in Northeast Asia,” said Kim Mi-ok from the Incheon government.

City government officials say they will begin a trial operation of the art village early next year, before officially launching it in September.