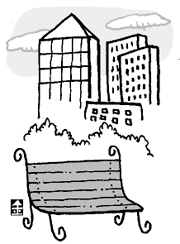 The concept of public design encompasses public benches, signs, buildings and even entire urban spaces. The slowing local economy can be revived through public design. By decorating public places, they become attributes for marketing. Professor Kwon Young-kull says public design is more than doing plastic surgery on urban spaces; it is giving character to an anonymous city. It is a sort of ideology or outlook because it raises values of safety, ecosystem and humanity and improves the quality of living, he adds.

Europe leads in public design and recently Japan has been emerging rapidly in this sector. Tokyo has changed its profile since 2000. In the late 1990s, a policy to revitalize the city started the movement. As Japan slipped into a recession after its bubble economy burst, the Japanese government prescribed design for the city to overcome the situation. In 2001, the Diet became the headquarters for reviving the city. All cabinet ministers served in the headquarters with the prime minister as chairman.

Modern mega-sized buildings were built in the city one after another, beginning with the Marunouchi Building across from Tokyo Station in 2002, Roppongi Hills in 2003, Omotesando Hills in 2006, Midtown and the Shin-Marunouchi Building in 2007. As the streets and architecture were transformed, many people from around the world came to see the city. As the city became a celebrated place for architecture and tourism, the local economy revived.

But lately criticism arose that the city development project has been influenced too much by globalization. Critics say that gorgeous and commercially appealing appearance shouldn’t be emphasized; instead the area’s history, connection with residents and community spirit should be emphasized.

Korea is now interested in public design. Related events are being held with local governments participating. The 2008 Public Design Expo was held recently and at the event one could see public design projects that local governments are pursuing with enthusiasm. Anyang City won the Grand Prix over other metropolitan cities. The city made it possible to travel to major cultural facilities within 15 minutes, transforming itself from an industrial city to a self-sufficient cultural city.

Munhyeon-dong, Busan, had a mural painting project. As residents painted walls, the neighborhood became more beautiful and people are flocking to the area to see the paintings. This is a good example of a public design project that is closer to residents’ daily life than the kind that local governments carry out to boast of their achievements.