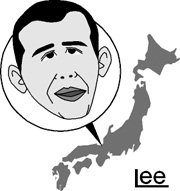 “Oceans bring people together, like a mother.” These are the words engraved in both Korean and Japanese on a stone monument in a quiet village in Fukui Prefecture, Japan.

The story behind the monument goes back to 1900, when a boat carrying 93 Korean merchants drifted to the village. This was half a month after they had bought goods in Vladivostok and were sailing back to Myeongcheon, Hamgyeong Province, when met with heavy seas. The villagers fed the merchants, treated their wounds and then helped them to safely return home.

Although the sailors and the villagers had to communicate through Chinese writing as neither spoke the other’s language, they embraced and cried when the merchants departed. The village inhabitants composed a song about exchanges between people of different ethnicities and are teaching it to students.

This fishing village is Obama, that has recently been made famous by global media. But it has always been a quiet fishing village of 32,000 inhabitants, known primarily for its fishing industry, particularly its mackerel.

The village’s second encounter with the Korean Peninsula was not so friendly. In 1978, 23-year-old Yasushi Chimura and his fiancee disappeared from the Obama seashore. Chimura’s car was found with the engine running at the coastal observatory. Later, it was confirmed that they had been kidnapped by a North Korean spy. They returned to Japan 24 years later in 2002 as a middle-aged married couple. This incident also occurred because of Obama’s geographical proximity to the Korean Peninsula with the sea in between.

President-elect Barack Obama apparently said during his phone conversation with Japanese Prime Minister Taro Aso that he knows about the town of Obama in Japan and that he would like to visit it. The town of Obama intends to invite him when he visits Japan after assuming the office of the U.S. presidency. Tourists are coming in droves to the town and buy keepsakes engraved with Obama’s image. This phenomenon is happening only because they have the same name but nothing else in common.

Perhaps it is part of an effort not to let go of the fortune that has been bestowed on them and to use it as an opportunity for the village’s development. At the heart of it all is the cosmopolitan nature of Obama’s inhabitants, who never forgot their exchanges with the world beyond the sea.

Isn’t President-elect Obama himself cosmopolitan, born of parents of different races and nationalities and who spent his childhood years in Indonesia?