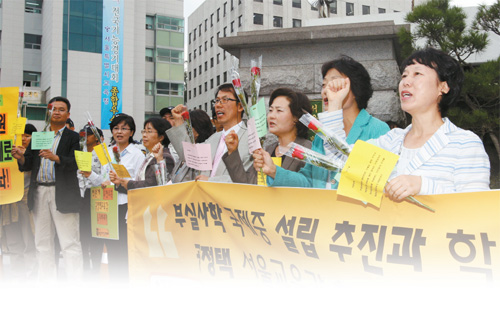 Civic groups demonstrate in front of the Seoul Metropolitan Board of Education in October. [JoongAng Ilbo]

It’s a conflict as old as the rocks, one that has shaped human history since our ancestors first emerged from the primeval soup: the struggle between the haves and the have-nots.

In Korea, a country where parents are obsessed with securing the best possible schooling for their offspring, market-oriented educational reforms proposed recently by the Lee Myung-bak administration have aggravated the tension between the well off and the economically less privileged.

Civic groups in particular are arguing that the establishment of international middle schools undermines the principle of equal opportunity in education.

Aware of the public backlash that a decision on the schools could spark, officials at the Seoul Metropolitan Board of Education undertook lengthy discussions last week, eventually concluding that two international middle schools would get the green light to open next March, effectively reversing an earlier decision.

Chun Se-young, a professor of education at Chungnam National University who was a member of President Lee’s transition team in February, argued that the approach taken by the administration would benefit schools in the long run.

“We hope that a few examples will inspire other schools and result in better quality education overall,” he said. “International schools offer parents of gifted students the chance for a special education. Other schools will follow this example.”

The professor’s words have become the Lee administration’s official mantra on education policy, a belief that the nation’s educational standards will be raised by differentiating schools and promoting diverse educational opportunities, which in turn will restore trust in the public educational system and lower private education costs.

At least, that’s the theory.

But opponents of this policy foresee only further increased private education costs.

Some even say that the administration’s education reform is intended to spur the economy, since the private education sector is bound to benefit.

“What sort of signal does this send to the public? There is not a single parent who will not take out a loan if it’s possible to give their kids a chance to get into a specialized school and enhance their chances of getting into a prestigious college,” said Lim Byeong-gu, an official of the Korean Teachers and Educational Workers’ Union.

“Those who have the financial means will pour in greater resources than others. How can you say this isn’t a policy that will eventually benefit the rich?” Lim added. 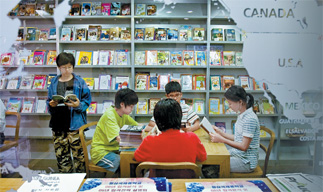 A cram institute in Daechi-dong, Seoul, that has just opened a prep class for elementary school children aiming to enter the new international middle schools. By Shin Dong-yeun

Naturally, ruling party members counter such arguments with their own logic, arguing that this is the best way for Korea to nurture “global leaders” and compete on the international stage.

“What the country needs to do is help each individual achieve what they desire,” said Grand National Party lawmaker Cho Jeon-hyeok at a recent forum discussing the issue. “When it comes to education, it’s the students and parents who know better what they need, rather than the government.”

Government officials have pointed out that the new international middle schools’ process of selecting students would not require English interviews or scores from English proficiency tests to prevent a rush to English language cram schools.

Assurances have been made that there will be little in the selection process that will assess English ability, although students will be taught in both English and Korean.

However, given parents’ desire to get their kids the best available education and considering that cram schools often dream up new schemes to sell their classes whenever the government tries to implement new measures, few believe that the government will be able to check rising private education costs. 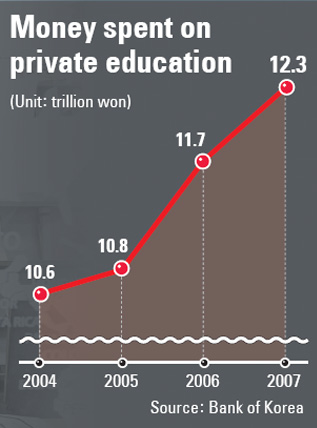 “Initially, there will be some increased spending on private education but you have to look at the long term effect,” Chun said.

It’s certainly not the first time the Lee administration has tried to bring about changes to the education system.

Earlier attempts to overhaul the country’s struggling public English education system ended with little progress. At the time, opposition parties seized the opportunity to attack Lee, accusing him of trying to implement a policy that would probably only benefit the wealthier classes as private education costs for English education were expected to rise.

The Lee administration’s struggle from the start with its image as a government that represents the upper income bracket of society, has not helped its cause.

When reshuffling his close aides in June of this year, President Lee made painfully sure that the financial assets of appointees were lower than those of the officials they were replacing.

Still, for the average citizen on the street, the perception that the Blue House is an extension of the wealthy class doesn’t seem to have changed much.

“If you ask me, they are all the same,” said Hyeon Ju-cheol, a taxi driver and father of three children. “They want to build schools for those who can afford all the private costs of preparing their kids for such places.”

Experts say the fanatical obsession with education here is rooted in the aftermath of the Korean War, which ended in 1953. With few natural resources of its own, South Korea quickly metamorphosed into an industrial nation by producing a highly educated workforce.

The number of special purpose high schools such as Daewon Foreign Language High School has been kept to a minimum until now, but President Lee has vowed to establish 100 more special high schools that would operate independently with their own curriculum and student selection criteria.

Considering that existing special schools dominate admissions into the nation’s top colleges, the move is likely to spur more competition.

According to recently released data, Daewon Foreign Language High School has ranked second during the past decade in terms of the number of students - 611 - accepted by Seoul National University, the nation’s top public university. The top six high schools that get the most students into this university are all special purpose high schools.

Governments periodically tinker with the college entrance system but the burden of private education is reaching new heights.

Today, real estate prices in the Gangnam area, southern Seoul, tend to rise with their proximity to top cram schools or elite schools.

According to the Bank of Korea, parents spent an estimated 12.3 trillion won ($9.2 billion) on private education last year and there are no signs of slowing down. Last year, the number of private cram institutes stood at 42,967, up from 20,938 five years ago.

A Blue House official, who didn’t want to be named, stressed that the government’s new measures are offering better educational opportunities for everyone, including poorer families.

“The purpose is to give talented students better tools while raising the level of education overall. Nobody is being left out,” said the official. “People have to realize we need a system that gives gifted students the opportunity to fulfill their potential.”

Another method designed to encourage competitiveness in schools is a new teacher evaluation system.

A pilot program is currently in place at 669 schools across the country.

Officials at a consultative meeting between the ruling party and the government last week decided to implement the system in 2010.

“Until now, the focus has been on general qualities that a teacher is supposed to have. This time the evaluation will be geared toward assessing teaching skills,” said Kang Sun-na, an official at the Education Ministry. “It’s a system designed to stir up competition between teachers so that they will proactively try to improve themselves.” The evaluation includes feedback from students and parents.

Wanting to be identified only by her last name Kim, a mother with two kids in elementary school said she agreed with the government’s decision to establish international middle schools but was also sure the cost of private education would rise.

“When it comes to education, parents here will do anything. I don’t expect private education costs to decrease. Things will just get worse,” said Kim.

The court has to reach a decision on whether to accept the petition within 30 days after which it will mull the situation over the next two to three years, although the court has rendered rulings in special cases more quickly.

The international schools will receive applications until Dec. 12 and announce shortlisted candidates shortly after.

Another factor that is sustaining the education craze here is the social structure that encourages children to take care of their aged parents.

“Once the schools open, the people who have been protesting against the international middle schools will be trying to get their own kids into those schools. That’s how passionate parents are here,” Kim added.

Opinion polls suggest the administration has to do a better job of convincing citizens that its education policies will benefit the country.

In a survey conducted last month by the Korea Society Opinion Institute, 58.3 percent of those polled opposed the establishment of international middle schools, while 38.3 percent supported it.

While the government might take heart from the support in the community for its plans, the tension between the two sides is not likely to die down in the foreseeable future.