The persecuted roots of Catholicism

The persecuted roots of Catholicism 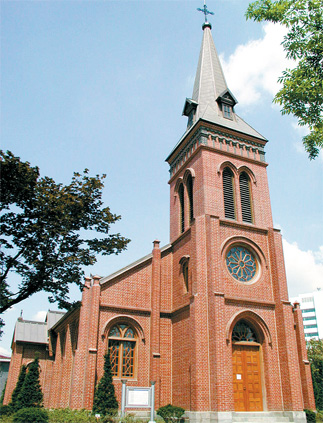 The story of Roman Catholicism in Korea is marked by the sacrifices made by the early pioneers, men of God who came as Catholic missionaries but who were shunned by the Confucian-oriented government of the Joseon Dynasty.

The tales of the martyrs and roots of Catholicism in Korea can be traced back to a small cathedral in central Seoul, nestled atop a hill and surrounded by office buildings.

While many people in Korea might be familiar with Myeondong Catholic Cathedral in the nation’s capital because of its long history and prominence as a sanctuary for protesters during the 1980s democracy movement, Yakhyeon Catholic Church in Jungnim-dong, Jung District, has the distinction of being the oldest Western-style Catholic church in Korea.

A cement path leads up to the tranquil church on the hill. Relatively small in size, the French-Gothic red brick building, which was built in 1892, has been designated historic site No. 252. 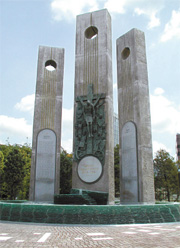 Nearby is the Seosomun Martyrs Memorial, which was built on the 100th anniversary of the church, to commemorate the Roman Catholic martyrs who were persecuted by Koreans.

Thousands of Catholics died during the 19th century at the hands of the Joseon government. Pope John Paul II canonized more than 100 of the Korean martyrs in 1984.

The church itself has a long and interesting history.

“Auxiliary Bishop Eugene Coste designed the building and Bishop Doucet, who was the first official priest of the church, oversaw the construction, which was carried out by Chinese bricklayers and Korean laborers,” said Yoon Jong-guk, in charge of the Seosomun Martyr Memorial and the historical artifacts inside the building.

“The construction of the church started on Oct. 23, 1891 and was completed on April 23, 1892. As only the second church in Seoul at the time, Yakhyeon Catholic Church oversaw the surrounding areas outside the four great walls of the capital city of Joseon,” Yoon said. 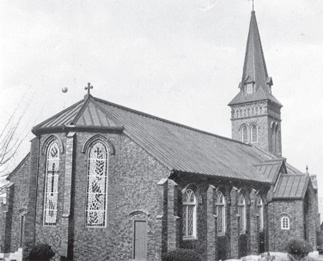 The church building measures 32 meters (105 feet) in length and is 12 meters wide. The bell tower is 22 meters high.

“It’s been said that the bell was imported from Rome at the time of construction and was the talk of the neighborhood when it was first installed. It was rung twice a day and it continues to be rung at regular intervals at noon and 6 p.m. on a daily basis for three to four minutes at a time,” said Ahn Jung-shik, an administrative official at the church.

Yoon said the architectural style of the building cannot be described as wholly Gothic. It is Gothic influenced and, being the first of its kind in Korea, influenced many church designs as well as other early modern architecture in Korea.

The name of the church originates from the grounds on which it was built.

According to officials from the Archdiocese of Seoul, Yakhyeon Catholic Church was not used merely as a place of worship. Bishop Doucet, who was keen on education, set up a girls’ school in the church in 1901 and a boys’ school was built nearby in 1906. Doucet went on to combine the two into a coeducational institution called Gamyeong, which was the Korean name given to Doucet, in 1909. The schools no longer exist. 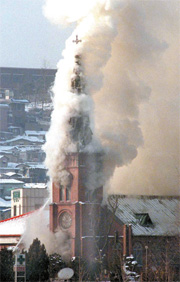 The aging church building got its first interior repairs in 1921 and had major renovation work carried out between 1974 and 1977, after which it was designated as an historic site by the government.

However, an arson attack in February 1998 nearly destroyed the building. “The fire caused the roof to cave in completely and destroyed the interior. The main frame and most of the brick structure were saved. Reconstruction took 18 months and was completed in September 2000.

“Extra attention was paid to restoring the building back to its original state, hence the building looks more like the original blueprint designed by Bishop Coste than the previously restored structure did,” explained Won Mi-young of the Seoul Archdiocese.

Ironically enough, the site also provides a view of the Joseon era execution grounds near Seosomun Park in Jung District, where many persecuted Catholics were executed in public.

Although the execution grounds have long since been devoured by the urbanization of the city, the Seosomun Martyrs Memorial occupies a prominent place in the grounds of Seosomun Park. 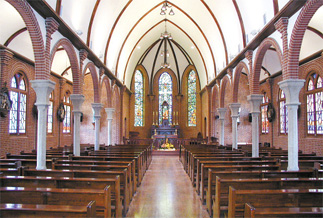 The interior of Yakhyeon Catholic Church

“There were four major gates and four smaller gates connecting the walls surrounding the capital city of Joseon. The corpses of the executed were carried out of the city via the smaller gates Gwanghuimun and Souimun, better known as Seosomun. Most of the executions of Catholics took place in the area just outside Seosomun gate,” said Won.

The persecuted Catholics were captured and detained in present-day Gwanghwamun and Sejongno, central Seoul, and tortured and interrogated at Uigumbu, near today’s Jongno 1-ga, also in central Seoul.

Once the death sentence was announced, the condemned were transported to the Seosomun area and beheaded in front of the public, Won added.

“In 1984, the original Seosomun Martyrs Memorial structure was built to honor the 103 martyrs in Korea who were canonized by Pope John Paul II.

The significance of its location [in present-day Seosomun Park] is due to the 44 martyrs who lost their lives on that spot in the Seosomun execution grounds,” said Won.

According to the Archdiocese of Seoul, the original martyr’s memorial was taken down due to redevelopment of Seosomun Park.

Once the construction of the park was complete, the new Seosomun Martyrs Memorial structure was erected in the park in 1999, where it stands today. Pilgrims and the Catholic faithful visit the site and masses are held on special holidays.