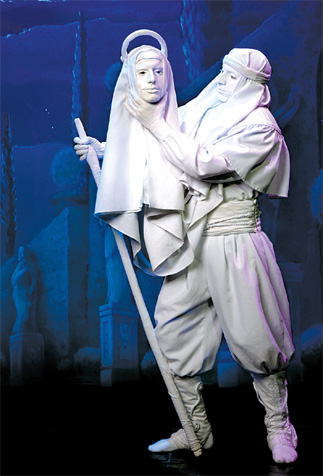 For French mime artist Albert Roubaud, less is more. His performances are surprisingly intense despite the lack of action.

His solo performance, “La Statue [The Statue]” is currently being staged as part of the “Gypsy Moon” show at the Walkerhill Theatre in the Sheraton Grande Walkerhill, eastern Seoul.

The show, produced by the Dion and Randall Production from Australia, invites audiences to travel around the world with Gypsy Moon to places like Paris, Persia and even to the moon.

Paris is where Roubaud greets a queen and performs a hatful of magic tricks, silently. He is a statue with two heads, dressed all in white. The ghostly lighting makes the actor seem even more other worldly.

“It is very difficult to play two different people at the same time. Each face should express true and precise emotions,” Roubaud says.

La Statue was first performed 10 years ago at the Trocadero, an area of Paris near the Eiffel Tower. Mime artist Jerome Murat from the Lido cabaret in the French capital created the act, which he later staged in Argentina, Mexico, Sweden, Turkey, Spain, Germany and now Korea.

There are currently three artists who can perform the act, including Roubaud who joined up two years ago.

“It may sound ironic, but for The Statue act, the less I move, the more people react,” the artist said.

In fact, when he appeared on SBS TV’s talent show “Star King” recently, the starring celebrities couldn’t help but gaze in wonder. All he did was stay still and silent.

As for the tricks in the act, Roubaud wasn’t giving anything away.

“People in the audience ask which face is real and which is false but all I can say is that both are real,” he said mischievously.

Roubaud’s act is far from the conventional artist dressed in black miming an imaginary wall.

Instead, you see an artist performing composite and detailed art.

To manage the delicate living statue performance, Roubaud works out every day to train his muscles. He needs to be in prime physical condition to enable his body to remain motionless.

In France, the artist is better known as a dancer and choreographer. Before he was recruited by Murat to join the mime troupe, Roubaud was part of an MTV dance crew and worked with the choreographer Jean Claude Marignale and the Venezuelan dancer Mey-ling Bisogno. He has even taught hip-hop.

For now, Roubaud has the simplest of dreams: He wants to spend time with his family in France. His show has a long run and he is feeling homesick.

He said he doesn’t wish to become a major mime artist like Marcel Marceau (1923-2007). Instead, he wants to set up his own performing company.

Though he wasn’t aware of the yearly Chuncheon Mime Festival held in Korea every year, Roubaud showed great interest in participating next year after the performance at Walkerhill Theatre ends in June.

And after he’s seen his family.


The Gypsy Moon at the Sheraton Grande Walkerhill, eastern Seoul, started in August this year and runs until June 2009. So far, the show has attracted over 25,000 people.