A knight with a German orchestra

A knight with a German orchestra 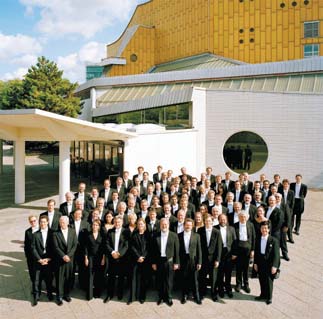 The Berlin Philharmonic. Provided by the organizer

The Berlin Philharmonic, under the baton of Sir Simon Rattle, will perform next week in Korea for only the third time in their history.

The Berlin Philharmonic first performed in Korea in 1984 with Karajan at the helm, and it took the orchestra 21 years to return when Rattle brought the musicians over in 2005.

At next week’s concert, the Berlin Philharmonic will be playing Brahms’ four symphonies over a two-day period.

The orchestra has a special bond with the German composer, who lived from 1833 to 1897.

Besides the skills and techniques needed to understand and deliver Brahms’ work, the orchestra’s founder von Bulow was a friend of the composer.

This special rapport meant that the orchestra was the first to play Brahms’ Symphony No.3, written in 1883, to a world audience.

Sir Simon, an Englishman, became the orchestra’s sixth conductor in 2002. Since then, he’s focused on transforming the historic orchestra with a blend of traditional and modern pieces.

For avid classical music fans, the price of the expensive concert tickets is unlikely to act as a deterrent from attending.

After all, it’s not every day you get listen to a Brahms symphony performed by the top orchestra from the composer’s native country.


The Berlin Philharmonic will perform at 8 p.m. on Nov. 20 and 21 at the Concert Hall of the Seoul Arts Center in southern Seoul.