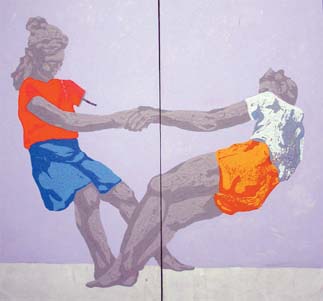 “Swing” (2008), a painting by Ivan Plusch. Provided by the organizer

The world is eyeing up Russian contemporary arts.

Following the disintegration of the Soviet Union in 1991 and the gradual breakdown of communism, Russian art has been blossoming, experts say.

Its potential is evident in the work of up and coming Russian contemporary artists and the interest of collectors like Roman Abramovich, the Russian billionaire who owns Chelsea Football Club in England.

The billionaire isn’t the only one into the arts.

“The time has come,” said Suh Jin-suk, the director of Alternative Space Loop near Hongik University in northern Seoul. The gallery is currently displaying Russian paintings and installations. “Russia has entered a golden age of cultural arts.”

Most of the exhibitors are based in Moscow.

“In the late 20th century, Russian art was melancholy, a reflection of the social depression that followed the Soviet Union’s collapse,” the director said.

The growth in artistic diversity, however, was initiated by former Russian President and now Prime Minister Vladimir Putin.

The new government’s privatization policies allowed artists to expand their horizons and visions.

The works displayed at Alternative Space Loop reflect both the past, present and future of Russian culture, history and ideas.

For example, Shekhovtsov uses polyurethane, a type of rubber mixed with acrylic, to symbolize industrialism in his installation “ATM.”

The exhibition runs until Nov. 28 at the Alternative Space Loop.

The nearest subway is Hongik University Station, line No. 2, exit 4.