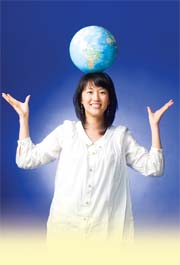 Park Seul-ki has sponsored a 12-year-old child in Bolivia with 20,000 won per month since March last year. By Kwon Hyuk-jae

It’s early November and the temperature is dipping. But it’s not just our bodies that are feeling the chill.

With the global economy mired in a slump the likes of which we haven’t seen in years, we’ve grown more reluctant to open up our wallets.

This is about the time of the year when you’d start hearing the ringing bells of the local Salvation Army. Maybe you will tell yourself you’re busy making your own ends meet in these tough times.

The JoongAng Ilbo recently met more than a few people with open hearts and open wallets. They aren’t millionaires by any means. But we met a 24-year-old man who said, “If I can’t donate money, then I can share my knowledge.” There was a university student who said “volunteering is just fun” and never misses her weekly volunteer work for a local charity.

For these young people, sharing is a way of life. They don’t care that they only have a dollar on them - but they care enough to share whatever they have.

Koo Mi-hye is a 24-year-old university senior who, for the past year, has been volunteering at The Beautiful Bookstore. She recently landed a job at an information technology company but she plans to spend some time on weekends on her volunteer work at the bookshop.

But Koo said she’d never thought much about the fact that the proceeds from the store are used for a good cause. 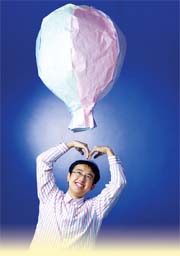 Nam Gi-hwan chose a different way to give back to society: by giving free science lectures to children.By Kwon Hyuk-jae

“I would just go around looking for used book stores because I just love books and that’s how I learned about The Beautiful Bookstore,” she said. “After a few visits, one thing led to another and I ended up becoming a volunteer. I get to meet a lot of really good people and I learn a great deal here. I’d like to keep volunteering.”

For a twenty-somethings like Koo, donating or volunteering isn’t something to do only when they can afford to, money- or time-wise, nor is it something they’re forced to do. Most people Koo’s age grew up having to fill in community service hours at school. Their foray into volunteerism may have been required but they gradually grew to learn the joy of sharing. For these young people who learned how to share at an early age, making donations is something that enriches their lives, too.

Making small donations through the Internet has recently emerged as a popular way of giving to charities. Major portal sites such as Naver.com and Daum.net have built donation sections and started campaigns urging netizens to make contributions, no matter how small. Most donors are Web-savvy surfers in their teens and 20s.

On the Naver’s donation site Happy Bean (http://happybean.naver.com), 1.1 million people have made their donations with either “Happy Beans” (each worth 100 won) or actual goods. Users can receive Happy Beans, cyber points, by using Naver e-mail accounts or by playing online games; no purchase is necessary. 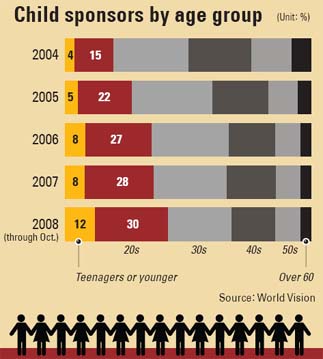 “I can use my cyber points to give to the charity of my choice,” said university student Kim Geun-hong. “And you don’t have to feel bad about giving only a tiny bit. What if it’s only 1,000 won? Get 10,000 visitors and it becomes 10 million won.”

Another form of contribution that has become popular of late is to sponsor needy children in poorer countries. According to World Vision Korea, the local affiliate of an international humanitarian organization working to help children around the world, sponsors in their 20s accounted for only 9 percent of all sponsors in 2001 but 30 percent this year. Teenaged sponsors rose from 2 percent to 12 percent over the same period.

Lee Hyun-jung, the head of public relations at World Vision, said young people see sponsoring children overseas “as something cool to do.”

“And for 20,000 won per month, which isn’t very much, sponsors draw a great deal of satisfaction,” Lee added.

Park Seul-ki, 24, is one such child sponsor. Since March last year, Park has been paying 20,000 won a month to help a 12-year-old girl named Florinda in Bolivia. She said she hadn’t given much thought to her sponsorship other than that maybe she was doing something good. But in May that year, Park saw a picture of Florinda for the first time.

“I felt like I finally had a younger sister,” she recalled. “And I read everything about her - what kind of food she liked and what subject she enjoyed most at school.”

After graduating from university, Park planned a trip around South America, with a short stopover in Bolivia. But it wasn’t going to be quite so simple.

“Florinda was living in the countryside, sort of in the middle of nowhere,” said Park, who received assistance from the local authorities. “The guide wanted to take me to the school first, which only made the trip longer.”

But once she got there, Park got a hero’s welcome. Cameras flashed and a flag was raised as if Park were a guest of the nation. Out in the village, residents dressed in traditional costumes played music and served their Korean guest a feast of lamb and potatoes.

Park spent a good half day with Florinda and when they had to part, both shed tears. The two have since exchanged letters. Park receives a bimonthly report on how Florinda is doing and how her contributions are being used.

“I know I am her sponsor, but she was the cutest girl in the whole town,” Park said. “I want to keep on giving until she grows up. And when we meet again then, it will be really something.”

For every youth making a monetary contribution, there are people who donate skills - that is, they put their knowledge and specific skills to use for the greater good.

Nam Gi-hwan, 24, was one of the bloggers who gave free lessons. His subject: how to make a hot-air balloon.

Nam signed on with CJ Donors Camp after reading about his fellow blogger’s experience in teaching youngsters how to cultivate cactus.

“Something as grand as volunteering never really entered my mind,” Nam said. “I just thought it’d be fun.”

Nam majored in physics as an undergraduate and a graduate student and he works in a company that produces special teaching materials for gifted students. Choosing his subject was easy.

“I wanted something that could teach them some scientific theory and make it fun at the same time,” Nam said. “And by showing them how hot air balloons work, I felt it would be easy for them to understand how hot air rises in the convection phenomenon.”

He didn’t spend much time on the theory itself. Nam instead handed out pieces of colored paper and glue sticks so that children could make their own miniature balloons. Putting hot air in them and setting them loose was the final step.

“I told them to write their wishes on the balloons and let them fly,” Nam recalled. One child ended up setting fire to his balloon. Getting him to stop crying and convincing him that he could make another balloon was the toughest part for Nam.

He had previously been a more passive donor, chipping in with some cash here and cyber points there. Nam said giving lessons is an entirely different way of donating.

“If you’re paying money, no matter how little, you’re losing something,” he said. “But if you share with others what you know - well, knowledge shared is knowledge doubled.”

But for today’s youth, there’s another side to giving back to others: It’d better be fun too. They no longer passively put their money into charities. A growing number are making their own plans on how to volunteer and for what causes.

One popular destination for them is the Web site of the University Student Society Volunteers (www.miraclemaker.or.kr), jointly run by the Federation of Korean Industries and Korea Council of Volunteering.

In the Rainbow Block project run by The Beautiful Foundation, piggy banks in each of the seven colors of the rainbow are distributed and participants share their stories on how they get to fill the piggy banks on their online community site (http://cafe.naver.com/bfchange).

Some say they put in a 100-won coin every time they fight off the urge to light a cigarette. Others feed the piggy bank for every pound they shed while dieting.

And today’s charities are trying to find different, and fun, ways to encourage young people to continue to give back to society.

“For the older generation, it was mostly what or how much they gave to whom,” said Seo Gyeong-won of The Beautiful Foundation. “But today, it’s more about how they can give. Volunteerism and donations today are about the joys of giving, too.”