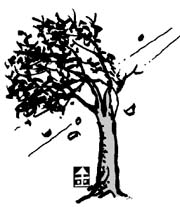 “The long nights during the winter solstice feel short ... just as wind blows into this tree with many branches/ Waves are high in a mother’s heart ...” goes the popular song “Years of Mother’s Care.”

The song was sung at drinking occasions in the past, as people reminisced about their mothers. It describes the devotion in a mother’s heart toward her children as wind in a tree with many branches.

Although the metaphors of the wind and the tree represent a mother’s love in the song, in classical Asian literature, it is quite different.

The wind and tree in the book, “The Outer Commentary to the Book of Songs by Master Han” are used as follows: “A tree tries hard to be quiet, but the wind does not stop.” Next, it says, “Even as a child attempts to support his parents, the parents do not wait.”

There is no greater sadness than the separation of parent and child by death. Therefore, in all ages and countries, a child’s regret for not having done his best for his parents is a subject many writers are drawn to writing about.

The verses above are expressions of a child’s deep regret about not having properly supported his parents. There are also idioms related to this.

However, these days the axiom, “A tree tries to be quiet” is more often used to refer to situations that develop differently from one’s wishes than about a child’s regret. It expresses the frustration and regret we feel when a situation develops contrary to our efforts.

People in South Korean society are worrying day and night about how to survive the global economic crisis. Everyone is concerned - the government, companies and common people alike.

It is akin to having the sun set, when we still have a long road ahead of us.

However, political winds are blowing all the time. In particular, if the opposition party wants to debate what is wrong about Minister Kang Man-soo’s statement that he contacted the Constitutional Court, they should do so quietly. Pickets and demonstrating outside the National Assembly as if glad to have finally stumbled on a cause and driving it as such only look like politicking.

Even if the government and the ruling party aren’t looking too, now is the time to concentrate. Political unity is important. The opposition party should not create winds just for the sake of politicking. If you blow a useless wind into the tree of Korea when stillness is required, you will be seen as full of nothing but hot air.