Where time has stood still on the Silk Road

Where time has stood still on the Silk Road 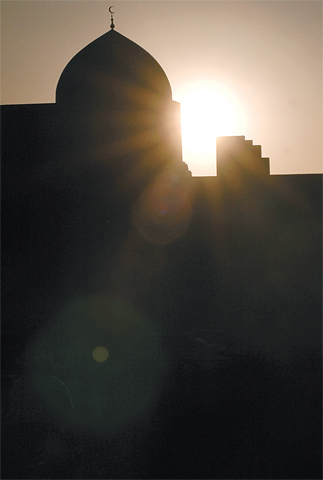 The dome of a mosque next to Poi-Kalon minaret.

UZBEKISTAN - After a four-hour ride along a bumpy, rugged road from Samarkand, in the far distance appears the oasis city of Bukhara.

The first impression of Bukhara isn’t like any other. It’s hard to find words to describe the beauty it presents.

With its narrow, 2,300-year-old streets and low domes, Bukhara is anything but a colorful modern city. Unlike the vast industrialization of Tashkent or the well-preserved Samarkand, Bukhara’s monotonous, bleak sandiness still recalls the medieval oasis at which Silk Road merchants on camels once stopped to quench their thirst and rest their feet in their long journey between east and west.

At dusk and dawn, the ancient buildings, basking in the orange sun, mesmerize with their splendor and elegance. 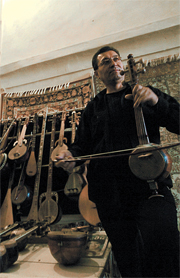 A merchant plays a stringed Uzbek instrument in a bazaar in Bukhara.By Lee Ho-jeong

Here, history isn’t buried or preserved. Modern and ancient coexist and the streets and people are more alive than in bigger cities.

Even a public bathhouse that has been passed down from generation to generation is in use, with hot steam rising from the ground and filling an ancient cave that was once occupied by Silk Road merchants.

In Sanskrit, Bukhara means “monastery.” Several historically significant religions have passed through this ancient city. First it was Buddhism, which traveled from India to the far end of Asia. Then came Zoroastrianism.

The oasis city settled with Islam in the eighth century and has been living by the teachings of the Koran ever since. 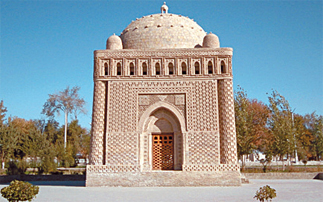 The various religions have left their mark, melding into a mixture of styles that help create the city’s unique look. Even today, just 20 meters below ground, archeologists are digging up artifacts from Buddhist and Zoroastrian shrines.

Evidence that the city was an oasis along the rich Silk Road lies in the many ponds known as hauz. There are over 100 hauz within the small city.

One of the most famous is the Labi Hauz. Today, next to the square pond is an open-air cafe that sells lamb dishes and other Uzbek food.

On either side of the hauz are the Kukaldosh Madrassah and the Nadira-Divan-bigi Hanaka. 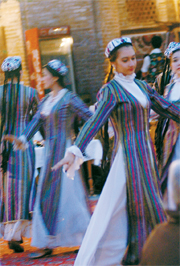 Uzbek dancers perform during dinner at Kulkadosh. By Lee Ho-jeong

Kukaldosh was once used by merchants as a top-quality shelter also known as a caravansarai. It was later converted into a madrasah, where student clerics studied history, religion, math and science.

Upon entering the Kukaldosh compound, visitors are greeted by a wide, open space surrounded by a single white two-story building. On each floor are small rooms that served as resting places for merchants. 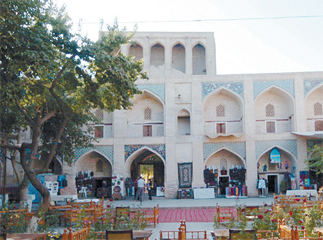 Nadira-Divan-bigi Hanaka was the temporary shelter for Darvesh, or Islamic monks, who passed their days in prayer and abiding by the teachings of the Koran.

The building today serves as a carpet and painting store and the crumbling wall is exactly how it has always been. Despite its use, the building provides a warm, nostalgic feeling that you would never find in a modern city.

Between the tourist attractions, there are numerous bazaars in ancient domes, which are a pleasure to visit.

Some of the bazaars have lines of bright red carpets on display, of all which are weaved in the traditional method.

One of the oldest buildings in the city is the Ismail Samani mausoleum. The mausoleum, built in the ninth century by then-ruler Ismail Samani, is neat and small in size.

It is different from other mausoleums, especially those that tend to be of an overwhelming scale.

Its bricks are stacked in such a way that at sunset and sunrise, each is illuminated in different colors, changing hues frequently depending on where the light hits the surface. The colors change from yellow to brown to pink.

Even the details on the brick, which were made using camel milk, are astonishing and elegant.

Close by is the Chashma Ayub mausoleum, which was built between the 12th and 16th centuries. The name means “Spring of Job.”

Within the mausoleum is a well that still serves its purpose of providing water to the people. Ayub is also famous in the Bible as it is the Islamic name of the prophet Job. Legend has it that people dying of thirst came to Job for help. The prophet struck the ground with his staff and up came a spring.

Inside are leather water containers from the time when the city served as an oasis for merchants.

Also not far from the two mausoleums is the Ark. This long fortress made of sandy bricks sits in an open space, and solemnly served as the residence of the Bukhara king. The fortress, which was partially damaged by Russian attacks in the early 20th century, is simply structured both inside and out.

Compared with other historical monuments and buildings, the fortress has a modest look.

In this city, where you can get hit in the face by sand when the wind blows, the most marvelous building and the symbol and beacon of Bukhara is the Poi-Kalon minaret, which stands tall among the small markets.

The minaret is a 46-meter (150.9 feet) tower built in the 12th century. It served as the beacon light for caravan travelers who journeyed through dry lands, but also had a more macabre purpose.

It was also known as the tower of death as it was from here that criminals trapped in sacks were thrown to the ground below to meet their doom.

Legend has it that when the Mongolian invader Genghis Khan conquered the oasis city, he destroyed numerous relics. He was standing in front of the tower looking up at it when the wind blew his hat off.

Picking up his hat, he ordered his men not to destroy the tower for it was the only thing in existence that made him bow.

The mosque next to the tower has a large courtyard in an open space and an old well. Right here in the empty open space, a large number of children were slain by Genghis Khan.

It is hard to believe that such a beautiful place was the execution site of young souls.

Across the mosque is a madrasah that still is occupied by young students learning history and religion.

Even on a fine afternoon when the sun was setting, a group of young Uzbek children were running around the space between the madrasah and tower as if it were their own personal courtyard.

Here the past is the present, and the future will be very much the same. In the 21st century, Bukhara is still a living museum along the Silk Road where culture and history once flourished.