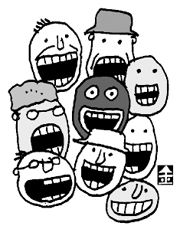 According to an article published in the prestigious science journal Nature in 2003, there are 6,809 languages spoken in the world today. Of these “living” languages, 90 percent have fewer than 100,000 speakers. Some 357 languages are known to have fewer than 50 speakers.

A total of 46 languages have just a single speaker left, while more than 73 percent of the world’s population speaks just 12 languages.

Languages are disappearing at an alarming rate, in part due to globalization, just as plants and animals are becoming extinct each year due to reckless development and exploitation.

Over the past 500 years, about 4.5 percent of the world’s languages have disappeared, compared with 1.3 percent of birds and 1.9 percent of mammals.

Aboriginal languages spoken by minority communities are dying out at a rate of about one every two weeks, and researchers speculate that only 150 or so will survive until 2100.

The Manchu language, the official language of the Qing Dynasty, is classified as a nearly extinct language.

It is used by fewer than 10 speakers, all of whom are over 80, in an isolated village in northeastern China.

In the wake of the 1911 Wuchang Uprising, which led to the collapse of the Qing Dynasty, the Manchu ethnicity has largely been assimilated into the Han Chinese.

Language is much more than simply a means of verbal communication. It encompasses a variety of experiences, history and worldview.

Language is a storehouse of senses and memories, so if a language disappears, a stock of accumulated knowledge is lost too.

For example, fishermen on the Palau Islands in the western Pacific differentiate hundreds of kinds of fish by different names.

It’s the same for dialects. The Jeju dialect preserves some archaic features also found in older forms of Korean, providing invaluable data on the forgotten history of the Korean language.

A petition to the Constitutional Court from the regional dialect research organization Taetmaldurae in May 2006 is currently pending. The petition asks that the “current policy of using the Seoul dialect to the exclusion of regional dialects be made a violation of the law.”

Whether or not the petition succeeds, we should pay more attention to safeguarding endangered languages and cultures, as well as plants and animals that are facing the abyss of extinction.