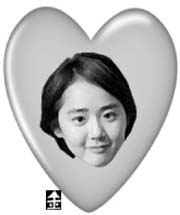 As expected, it was Moon Geun-young.

It has been revealed that the anonymous celebrity who donated 850 million won ($607,000) over six years to the Community Chest of Korea was indeed the popular actress.

The Chest held its tongue at first, but as word emerged that it might be Moon, it revealed the mystery donor’s identity.

Moon’s good work as a “donor angel” is already well known. Long ago during an interview, she said, “My parents are worried about my earning a lot while still young. They say I shouldn’t fritter money away carelessly.”

Her good deeds are at the heart of the matter, more so because it contrasts with some celebrities involved in gambling, which fuels public ire.

Moon has been loved as a proper and pure “younger sister of the people” since she debuted as a child actress in the 2000 TV drama “Fall Nursery Story.”

Unlike other teenage celebrities who have already physically matured, she had the look of a young girl, she studied hard and acted well. People called her flawless and unspoiled.

To adults surrounded with “frightening teenagers,” Moon reassured them. Recently, she earned the nickname “younger brother of the people” for acting as a female painter dressed as a man, Shin Yun-bok, in the SBS drama “Painter of the Wind.”

Although she wants to get rid of the younger sister of the people image by acting as an adult, the public still wants to pigeonhole her as a symbol of purity.

One of the reasons she didn’t want to reveal her name as a donor lay in having suffered from vicious rumors that accused her of pretending to be good, talk that followed her good deeds after her debut.

Instead, praise is pouring in, and there is even mention of her family background: Her maternal grandfather was a unification activist.

Beyond having evoked noblesse oblige, Moon’s good deeds seem to have challenged some of the public’s disjointed views of celebrities’ charity. Here, we mean the skepticism over the truthfulness of celebrities’ good deeds, accusing them of greed for honor and ostentation.

Of course, hidden here is the public’s mistrust of powerful people “doing good” and a sense of inferiority, the idea that people can’t succeed by only being good.

Moon has proved this way of thinking to be invalid and hypocritical. She has made people believe in the power of a good heart.

She is indeed a highly praiseworthy and lovely younger sister of the people.